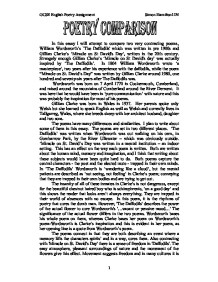 In this essay I will attempt to compare two very contrasting poems, William Wordsworth's `The Daffodils' which was written in pre 1900s and Gillian Clarke's 'Miracle on St David's Day', written in the 20th century. Strangely enough Gillian Clarke's 'Miracle on St David's day' was actually inspired by 'The Daffodils'. In 1804 William Wordsworth wrote 'a masterpiece', two years after his experience with the daffodils, while the poem "Miracle on St. David's Day" was written by Gillian Clarke around 1980, one hundred and seventy-six years after The Daffodils was. Wordsworth was born on 7 April 1770 in Cockermouth, Cumberland, and raised around the mountains of Cumberland around the River Derwent. It was here that he would have been in 'pure communication' with nature and this was probably the inspiration for most of his poems. Gillian Clarke was born in Wales in 1937. Her parents spoke only Welsh but she learned to speak English as well as Welsh and currently lives in Tallgarreg, Wales, where she breeds sheep with her architect husband, daughter and two sons. ...read more.

Also contrasting with 'Miracle on St. David's Day' there is a sense of freedom in 'Daffodils'. The easy atmosphere, pleasant surroundings of nature and the movement of the flowers give this effect. Movement suggests freedom and in many cultures it is symbolised in native dances. The poet's use of participles such as 'dancing' and 'fluttering' suggests constant movement, and that the daffodils are actually alive. This contrasts with Clarke's sense of entrapment as there is a dream-like atmosphere, especially in the first stanza: '...as a cloud ... floats ... fluttering ...breeze...' When Clarke introduces us to the patients, there is almost a hint of humour when Clarke describes "An old woman, interrupting, offers as many buckets of coal as I need", which shows the state of the patients. Her poem is detached and this allows the reader to form his own opinion of the poem. The poems are different as 'Miracle on St. David's Day' is written like a story, sentences starting in one stanza and finishing in another. Also this poem does not rhyme; it looks like a poem but sounds like prose. ...read more.

In my own opinion, I prefer Wordsworth's poem over Clarke's as I feel that it does something for me, and I feel that I want to be in Wordsworth's shoes, as he gets such a 'buzz' when he sees the daffodils. When he sees them his spirit is immediately lifted, and he feels 'gay'. This conveys that the sight of the daffodils was magnificent, and this is why I adore this poem so much, I almost feel jealous of Wordsworth for two reasons - one for his being there to witness the daffodils and also because he has an extremely talented writing ability always at his fingertips. Clarke's poem is not as good as Wordsworth's, although she does describe the event very well, and the poem is superbly written, but in my opinion, Wordsworth has written a better poem, one which is renowned the world over. I say that I prefer Wordsworth's poem as he writes about a more uplifting theme, and this gives Wordsworth the edge. Clarke's poem is not as uplifting as Wordsworth's. I think that he has used the perfect words to describe his perfect feelings, and that is how I describe his perfect poem. ?? ?? ?? ?? GCSE English Poetry Assignment Simon Hamilton11N 3 ...read more.