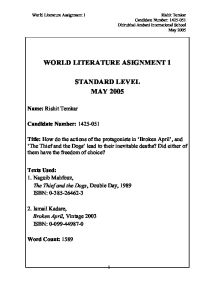 How do the actions of the protagonists in 'Broken April', and 'The Thief and the Dogs' lead to their inevitable deaths? Did either of them have the freedom of choice?

WORLD LITERATURE ASIGNMENT 1 STANDARD LEVEL MAY 2005 Name: Rishit Temkar Candidate Number: 1425-051 Title: How do the actions of the protagonists in 'Broken April', and 'The Thief and the Dogs' lead to their inevitable deaths? Did either of them have the freedom of choice? Texts Used: 1. Naguib Mahfouz, The Thief and the Dogs, Double Day, 1989 ISBN: 0-385-26462-3 2. Ismail Kadare, Broken April, Vintage 2003 ISBN: 0-099-44987-0 Word Count: 1589 Both Ismail Kadare's 'Broken April' and Naguib Mahfouz's 'The Thief and the Dogs' have two different protagonists whose similar quest for revenge leads to their deaths. Both stories revolve around revenge and the choices made by the protagonists to extract this revenge. For Gjorg, the law makes revenge a legal compulsion with the only other option being alienation and death, whereas for Said, revenge is his chosen path. Both, placed in similar situations, react very differently. The question is whether they had the freedom of choice to prevent the inevitable finality. Gjorg Berisha, the central character in Broken April, is a captive. He is forced to follow an age-old Law, more like a tradition, which he constantly questions. The 'Kanun1', or governing law, states that if two families begin a feud, they must continue until one of them is completely wiped out, or until they come to a settlement. ...read more.

Said senses that he is knocking at he wrong door. Rauf is not the same anymore. He decides immediately that, 'What if Rauf should have proved to have betrayed those ideas? He would then have to pay dearly for it. On that score there was not the slightest doubt.9' Said decides that Rauf is just another person who has betrayed him, and he must pay for it. It is easy to fathom Said's thought process. All who was dear to him have already turned their backs on him, including, his daughter Sana. At this time, Said can think of nothing but vengeance on all those who have betrayed his trust. He decides to begin by 'relieving' Rauf of a few of his worldly possessions. He goes back that night to burgle Rauf's house, only to find Rauf expecting him there. Rauf's words ring true when he said, 'Your envy and arrogance were aroused, so you rushed in headlong as always, like a madman.10' His words simply emphasise that Said has always been like that - foolishly spontaneous, although this time Said's anger was grounded in a strong sense of betrayal and deceit. Gjorg, on reaching the Kulla of Orosh, meets other men who are there to pay the blood tax as well. He converses with them and little by little their stories begin unfolding; these stories bring questions. 'What will you do with your thirty-day truce? ...read more.