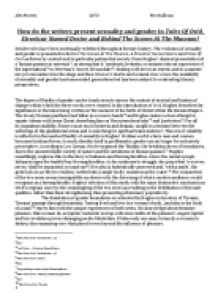 How do the writers present sexuality and gender in Tales Of Ovid, Streetcar Named Desire and Behind The Scenes At The Museum?

﻿Alex Morris 4070 Mrs Sullivan How do the writers present sexuality and gender in Tales Of Ovid, Streetcar Named Desire and Behind The Scenes At The Museum? Gender roles have been continually redefined throughout literary history. The evolution of sexuality and gender is presented in Behind The Scenes At The Museum, A Streetcar Named Desire and Tales Of Ovid as driven by context and in particular patriarchal society. From Hughes? classical presentation of a ?human passion in extremis?[1], so strong that it ?combusts, levitates, or mutates into an experience of the supernatural?[2] to Streetcar?s ?succes de scandale?[3], dealing with s*x to an extent, and in a manner not yet encountered on the stage and then Museum?s sterile and comical view of s*x, the mutability of sexuality and gender has transcended generations but has been subject to contrasting literary perspectives. The degree of fluidity of gender can be clearly seen to mirror the context of societal and historical change within which the three works were created. In the introduction of Ovid, Hughes describes the significance of the tales being written at ?the moment of the birth of Christ within the Roman Empire. The Greek/ Roman pantheon had fallen in on men?s heads?[4] and Hughes makes a clear attempt to equate Adonis with Jesus Christ, describing him as ?the miraculous baby?[5] and ?perfection?[6]. For all its Augustean stability, Rome was at sea in hysteria and despair, caught in a tension between the sufferings of the gladiatorial arena and ?a searching for spiritual transcendence?. This era of volatility is reflected in the marked fluidity of sexuality in Hughes? Ovidian world, where men and women becomes birds and trees. As such, identity itself is problematic; gender can no longer be exclusively prescriptive. According to Leo Curran, Ovid recognised the ?fluidity, the breaking down of boundaries, due to the uncontrollable variety of nature and the unruliness of human passion.?[7] Hughes unsettlingly explores this in the story of Salmacis and Hermaphroditus, where the carnal nymph Salmacis rapes the bashful boy Hermaphroditus. ...read more.

brush our hands across our foreheads in exactly the same way that Alice has just done’[31]. The reference to genes by Atkinson implies that behavioural patters are inherent and inescapable. Even Adrian, as the sole gay man in the novel, is presented in clichéd terms as having an interest in hairdressing, his intimate conversation with a barman prompting a dramatically ironic exclamation of ‘that’s q***r’[32] from the unwitting Uncle Clifford. Gender roles within all three texts are enforced through the s****l dominance of men over their female companions. Critic C.W.E Bigsby noted that ‘the shock of Streetcar…lay in the fact that this was the first American play in which sexuality was patently at the core of the lives of all its characters, a sexuality’[33]. Williams presents s*x as having the power to redeem or destroy, to compound or negate the forces, which bore on those caught in a moment of great social change. The ‘gaudy seed bearer’[34] Stanley is a b*****l representation of the new South and he uses his intense virility and s****l power to great effect. His s****l magnetism is exemplified by the symbolic package of meat thrown to a visibly delighted Stella in the opening scene. The connotations of his s****l proprietorship over Stella and her s****l infatuation with him are not lost on the watching n***o woman. In stark contrast, Bunty feigns deafness at the butcher’s ‘innuendo laced conversations’[35], exposing him as a ‘bluff parody of himself’[36]. Her caustic description of him as ‘a pig…smooth shiny skin stretched tightly over his buttery flesh’[37] is both comical and telling in her uptight rejection of his smutty behaviour. This mordant tone continues into the awkwardly comical depictions of male s****l supremacy in Behind The Scenes’ fornications. Ruby’s conception by a typically tipsy George and equally typically stoic Bunty who is ‘pretending to be asleep’[38], summarises well Atkinson’s presentation of a tired female submission to male virility in the repressed society of 40’s England. ...read more.

He desires only to bathe and his obliviousness to her advances are indicative of his youth and inexperience but also his male gender precluding him from the experience of passion, as echoed in the ‘nine tenths of the pleasure’[80] that the female takes in Tiresias. Thus he becomes an easy prey and ‘Like a snake’[81] she ‘flings and locks her coils/ around him’[82], a ‘tangle of constrictors, nippled with suckers’[83] – the disturbing organic metaphors further exemplifying her atypical literary position as the female aggressor of r**e. Throughout this scene however, Salmacis is never rendered as in s****l control; Hermaphroditus ‘will not surrender/ or yield the least kindness/ of the pleasure she longs for/ and rages for, and pleads for’[84]. Hughes’ implication of their demise as a result of their unnatural union is clear - the only way in which a woman can r**e a man is if he is not clearly male. To conclude, in the words of an anonymous critic ‘gender roles figure so prominently in literature that they begin to take on a life of their own, whereas to become fluid in the mind of the writer and reader alike… it is evident that when working with ambiguity, man and woman, whose boundaries are few and far between, become locked in a dimension of transmutation’. These words said of Ovid, offer a concise summary of the three works, applicable mainly to Hughes’ characters such as Salmacis and Tiresias, and Williams’ Blanche. Ultimately however, despite the differing time periods in which they were written the role of gender is an inextricable fibre in ancient, southern and modern literature. The three writers posit sexuality and gender contrastingly; Williams’ uncompromising ‘personally and socially powerful’[85] play, Hughes’ matter-of-fact narration and Atkinson’s comically clichéd bildungsroman. A prominent similarity in the treatment of gender by all three authors is the ability of each to manipulate and intertwine not only their ideas of the gender line but also those of their contextual popular culture in order to effectively and complexly examine its role. ...read more.