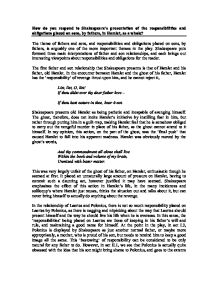 How do you respond to Shakespeare's presentation of the responsibilities and obligations placed on sons, by fathers, in Hamlet, as a whole?

How do you respond to Shakespeare's presentation of the responsibilities and obligations placed on sons, by fathers, in Hamlet, as a whole? The theme of fathers and sons, and responsibilities and obligations placed on sons, by fathers, is arguably one of the more important themes in the play. Shakespeare puts forward three main interpretations of father and son relationships, and each brings out interesting viewpoints about responsibilities and obligations for the reader. The first father and son relationship that Shakespeare presents is that of Hamlet and his father, old Hamlet. In the encounter between Hamlet and the ghost of his father, Hamlet has the 'responsibility' of revenge thrust upon him, and he cannot reject it, List, list, O, list! If thou didst ever thy dear father love - If thou hast nature in thee, bear it not. Shakespeare presents old Hamlet as being pathetic and incapable of avenging himself. The ghost, therefore, does not incite Hamlet's initiative by instilling fear in him, but rather through putting him in a guilt-trap, making ...read more.

This 'bestowing' of responsibility can be considered to be only natural for any father to do. However, in act II.1, we see that Polonius is actually quite obsessed with the idea that his son might bring shame to Polonius, and goes to the extents of sending a spy keep a watch on Laertes, and even 'muddy' his name, so that he does not get too comfortable. But breath his faults so quaintly that they may seem The taints of liberty, the flash and outbreak of a fiery Mind 'I saw him enter a house of sale', Videlicet, a brothel, or so forth. Polonius even goes to extents of 'dishonouring' so that he may retain his own honour, which is a rather strange sense of logic. In this sense, it can be said that Polonius places responsibility on his son just to save himself any possible shame. This is rather selfish on the part of Polonius, but it is in accordance with Shakespeare's illustration of Polonius's character as being that of a conniving, scheming, slightly evil old man that you might feel sorry for. ...read more.

In all cases except the diplomatic one, the fathers in question were rather selfish and self-centered in thinking of ways to get their sons to do their bidding. In the case of Norway and Fortinbras, it was done for diplomatic reasons, but it was still to save the bed-ridden Norway's old skin. This gives a rather negative impression of father figures and what they tell their children to do. Possibly, Shakespeare chose to illustrate these aspects of fatherhood the way that he did because it was his own interpretation of 'responsibilities and obligations' set down by fathers, maybe drawn from his own bad experiences with his own father during his younger days. Hamlet, as a play, could be then seen to be a Shakespearean 'self-help' guide on "How to know what is right to do as a father by knowing what is wrong to do as a father", and it could have been a lesson to all the bad fathers out there who use manipulate their sons as they would a mindless henchman. ...read more.