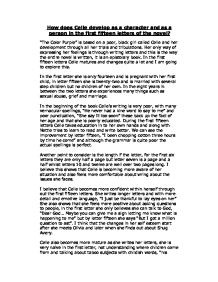 How does Celie develop as a character and as a person in the first fifteen letters of the novel? &quot;The Color Purple&quot;.

How does Celie develop as a character and as a person in the first fifteen letters of the novel? "The Color Purple" is based on a poor, black girl called Celie and her development through all her trials and tribulations. Her only way of expressing her feelings is through writing letters and this is the way the entire novel is written, it is an epistolary book. In the first fifteen letters Celie matures and changes quite a lot and I am going to explore this. In the first letter she is only fourteen and is pregnant with her first child, in letter fifteen she is twenty-two and is married with several step children but no children of her own. ...read more.

During the first fifteen letters Celie takes education in to her own hands and along with Nettie tries to learn to read and write better. We can see the improvement by letter fifteen, "I been chopping cotton three hours by time he come" and although the grammar is quite poor the actual spellings is perfect. Another point to consider is the length if the letter, for the first six letters they are only half a page but letter seven is a page and a half whilst letters 10 and twelve are well over two pages long. I believe this shows that Celie is becoming more aware of her situation and also feels more comfortable about wring about the issues she faces. ...read more.

I think that the changes in her self esteem start after she meets Olivia and later when she finds out about Shug Avery. Celie also becomes more mature as she writes her letters, she is very na�ve in the first letter, not understanding where children come from and talking about taboo subjects with childish words, "his thing". In letter thirteen she says "I say, just born that way" this shows that she understands she should just keep quiet and she also protects Harpo showing more mature emotions. Overall I think that the most obvious change is Celie's confidence and i believe as she writes more and faces more issues she will become even more confident in her writing, her personality, I also feel that this will make her more mature. ...read more.