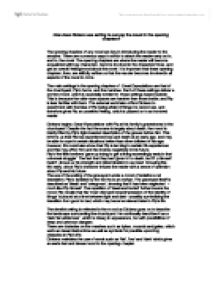 How does Dickens use setting to convey the mood in the opening chapters of Great Expectations?

How does Dickens use setting to convey the mood in the opening chapters? The opening chapters of any novel are key in introducing the reader to the storyline. There are numerous ways in which to attach the reader early on in, and to, the novel. The opening chapters are where the reader will become acquainted with key characters, become involved in the characters' lives, and get an overall feeling/mood about the novel. It is important that these opening chapters, then, are skilfully written so that the reader becomes involved in all aspects of the novel to come. The main settings in the opening chapters of Great Expectations are that of the churchyard, Pip's home, and the marshes. Each of these settings deliver a sombre mood, which is especially evident in those settings based outside. This is because the wide-open spaces are harsher than those inside, and Pip is less familiar with them. The external world also offers Dickens to experiment with the idea of Pip being afraid of things he cannot see, and therefore gives Pip an unsettled feeling, which is passed on to an involved reader. ...read more.

There are obstacles on the marshes such as dykes, mounds and gates, which work as visual obstructions as well as symbols for possible upcoming obstacles in Pip's life. Dickens maintains the use of words such as 'flat', 'low' and 'dark' which gives an eerie feel and dense mood to the opening chapter. There is further symbolism in Pip's surrounding, in that there is both a flowing river and flat, solid ground on one landscape; this could reflect that there are two ways in which to travel the same distance, and that Pip is soon to have to choose a path to take, (in turn altering his life), - this is thought-provoking and concerning to a reader, and intensifies the already dampening mood. The marshland is repeatedly represented as a place where good meets sin, this is shown in the image of its skyline - which is of 'long angry red lines and dense black lines intermixed' - as well as in the only two vertical structures on the horizontal landscape of the marshes - a beacon and a gibbet. ...read more.

Instead of Pip's 'running at everything, everything seemed to run at him'. Pip's guilty conscience shows that he is an innocent and thoughtful child, who knows the difference between right and wrong. Pip is no longer as afraid of Magwitch and, as he becomes less afraid, so too does the reader for Pip. He is more afraid of the obstacles that seem to 'call out at him' as he crosses the marshes. Dickens makes Pip's surroundings surreal under the mist to convey a feeling of uncertainty and ambiguity. These opening chapters prove important as they become even more relevant later into the novel. The 'bleak' settings and heavy moods give the reader a sense of what's to come of the story, and of Pip. The settings in the earliest chapters are thoroughly described in order to deliver a definite mood. Though the mood of the opening chapters remain similar to each other, the settings go between that of the desolate marshes and of Pip's own home. The fact that the settings can be of two extremes, and the mood warrant similar feelings from a reader, shows that Dickens is highly skilled and deliberate in how he delivers these chapters so that they can be perceived this way. ...read more.