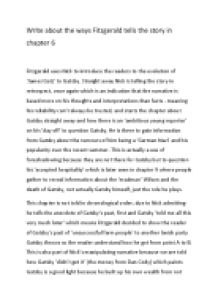 How does Fitzgerald tell the story in chapter 6 of &quot;The Great Gatsby&quot;?

﻿Write about the ways Fitzgerald tells the story in chapter 6 Fitzgerald uses Nick to introduce the readers to the evolution of ?James Gatz? to Gatsby. Straight away Nick is telling the story in retrospect, once again which is an indication that the narrative is based more on his thoughts and interpretations than facts - meaning his reliability can?t always be trusted, and starts the chapter about Gatsby straight away and how there is an ?ambitious young reporter? on his ?day off? to question Gatsby. He is there to gain information from Gatsby about the rumours of him being a ?German Nazi? and his popularity over the recent summer. ...read more.

which paints Gatsby is a good light because he built up his own wealth from not wanting to be a ?janitor? anymore. However, its also the work of Tom do we understand Gatsby and Nick aren?t being completely open about his wealth because Tom suddenly suggests Gatsby is a ?bootlegger? meaning Nick starts the chapter with an anecdote of Gatsby?s heroic attempt to save Dan Cody?s yacht but refuses the admit he then later created his money from illegal behaviour. The main setting of chapter 6 is Gatsby house. However, it?s seen at day time and night. In the day time we see how Gatsby has guests who include Tom Buchanan are ready to leave. ...read more.

I?m giving out green-.? This is to show mouldy love because Daisy had previously said; ?if you want to kiss me? which Nick would not want to do because he does not love Daisy, meaning the ?green card? is a representation of mouldy love. However, it must not be forgotten that Gatsby looks at the dock for the ?green light? before reuniting with Daisy, which could be a suggestion from Fitzgerald to show how Gatsby?s and Daisy?s love has expired over the ?5 years next November? yet both of them are unable to admit it. This is also a use of foreshadowing because green can also represent freedom, freedom is actually what Tom and Daisy always seem to convey after something has gone wrong, meaning that they are able to move on swiftly after events, such as Gatsby and Myrtles death. ...read more.