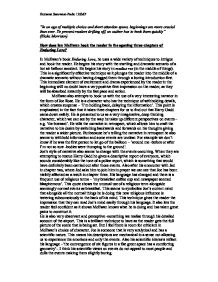 How does Ian McEwan hook the reader in the opening three chapters of Enduring Love?

"In an age of multiple choice and short attention spans, beginnings are more crucial than ever. To prevent readers drifting off, an author has to hook them quickly" (Blake Morrison) How does Ian McEwan hook the reader in the opening three chapters of Enduring Love? In McEwan's book Enduring Love, he uses a wide variety of techniques to intrigue and hook the reader. He begins his story with the startling and dramatic scenario of a hot air balloon accident. He begins his story in medias res (in the middle of things). This is a significantly effective technique as it plunges the reader into the middle of a dramatic scenario without having dragged them through a boring introduction first. This immediate element of excitement and drama experienced by the reader in the beginning will no doubt have a very positive first impression on the reader, as they will be absorbed instantly by the fast pace and action. McEwan also attempts to hook us with the use of a very interesting narrator in the form of Joe Rose. He is a character who has the technique of withholding details, which creates suspense - 'I'm holding back, delaying the information'. ...read more.

It also lets the reader feel confident as it shows McEwan knows what he is doing and has taken great pains to construct it. He is also very observant and perceptive -something we realise through his detailed account of the airport. This is a brilliant technique to have as the reader gets the full picture of the scene that is being set. But I feel there is room for criticism in McEwan's choice of character. Joe is someone that is very analytical and has a scientific nature. This means his descriptions are mechanical in a sense not allowing us to experience the emotions and only the events. Also his scientific interests reflect his language -'the convergence of six figures in a flat green space has a comforting geometry'-. I think his scientific views on events do not appeal to most people and dulls the events making them slightly boring. I think Joe is a character who knows he is in charge of the narrative. For example, when he says 'let me freeze the frame' it gives the impression that he is the director of a film that we are watching. ...read more.

McEwan also hints at authenticity in Enduring Love giving real names and places and even the balloon accident is not a totally unbelievable incident. This sense of the narrative occurring in the real world and one that British readers may be vaguely familiar with makes the readers feel it is much more believable. The characters appearing in the novel are also quite intriguing and will interest the reader. The most intriguing character will no doubt be Jed Parry. He is a religious character and there are hints of him being h********l. There are big hints by Joe that he proves a major role in the novel - 'had I known what this glance meant to him... I would not have been so warm', although at present it is unclear, the ominous signs are clearly present. He is also an unusual character, which is denoted by his praying over the dead body of Logan. His phone call to Joe at the end of chapter three gives it an almost cliffhanger ending. Especially after his seemingly h********l comments to Joe readers will definitely be interested in this unusual character and how he will play a major role in the narrative. Kumaran Saravanai-Prabu 12SMP ...read more.