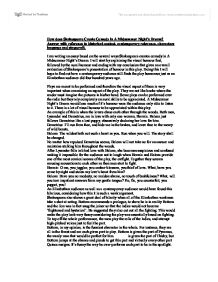 How does Shakespeare Create Comedy in A Midsummer Night&amp;#146;s Dream? Answer with reference to historical context, contemporary relevance, characters language and stagecraft.

How does Shakespeare Create Comedy in A Midsummer Night's Dream? Answer with reference to historical context, contemporary relevance, characters language and stagecraft. I am writing an essay based on the several ways Shakespeare creates comedy in A Midsummer Night's Dream. I will start by explaining the visual humour first, followed by the aural humour and ending with my conclusion that gives an overall evaluation of Shakespeare's presentation of humour in this play. Doing this I will hope to find out how a contemporary audience still finds the play humorous just as an Elizabethan audience did four hundred years ago. Plays are meant to be performed and therefore the visual aspect of them is very important when examining an aspect of the play. They are not like books where the reader must imagine the pictures in his/her head. Some plays can be performed over the radio but they rely completely on aural skills to be appreciated. A Midsummer Night's Dream would lose much of it's humour were the audience only able to listen to it. ...read more.

This would make the play look very funny considering the play was essentially based on fighting. To top off the whole performance, the men play the rolls of the ladies, and attempt high-pitched voices just to feel the part. Bottom, in my opinion, is the funniest character in the whole. For instance, they are all in the forest and are each given part to play. Bottom is given the part of Pyramus, the manly man that would be perfect for him. is given the part of Thisby, but Bottom jumps at the chance and pleads to get this part and virtually every other part Quince assigns. It's funny the way he over-performs each part to be in the spotlight. Whilst A Midsummer Night's Dream is visually comic, a lot would be lost were there no sound to go with it. The play is rich in Shakespeare's language as a tool for creating comedy. I am now going to explore the various ways that the language is used to this effect. A lot of enjoyable malapropism is in this play. ...read more.

The audience would see the unhappy ending and have that fixed in their head blocking out the funny side of the play. Shakespeare's made this play comical by using witty humour, offending characters in an amusing way and even providing visual hilarious scenes that not only an Elizabethan audience would find funny but a contemporary audience would, just as much. But saying that, there were a lot of scenes where it just wouldn't be funny to a contemporary audience because the humour has matured a lot more than it would've been in the sixteenth century. For example, all the men who played the women's parts, this would be extremely amusing for a sixteenth century audience because in those days things were different and it was uncommon. An audience today would have seen this so many times in reality that the funny side of it would have just worn off. I personally only found slight parts of the book funny and the video moderately funny. Whether I'd find the film funny or not I think relies totally on the director and whether he feels the comedy he adds in is appropriate or pointless. He's the only one who can decide the comedy involved in the play and just hope the audience enjoy it. ...read more.