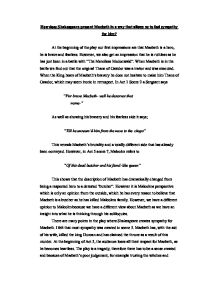 How does Shakespeare present Macbeth in a way that allows us to feel sympathy for him?

How does Shakespeare present Macbeth in a way that allows us to feel sympathy for him? At the beginning of the play our first impressions are that Macbeth is a hero, he is brave and fearless. However, we also get an impression that he is ruthless as he has just been in a battle with "The Merciless Mcdonwald". When Macbeth is in the battle we find out that the original Thane of Cawdor was a traitor and was executed. When the King hears of Macbeth's bravery he does not hesitate to make him Thane of Cawdor, which may seem ironic in retrospect. In Act 1 Scene 2 a Sergeant says "For brave Macbeth- well he deserves that name-" As well as showing his bravery and his fearless side it says; "Till he unseam'd him from the nave to the chaps" This reveals Macbeth's brutality and a totally different side that has already been conveyed. However, in Act 5 scene 7, Malcolm refers to "Of this dead butcher and his fiend-like queen" This shows that the description of Macbeth has dramatically changed from being a respected hero to a detested "butcher". ...read more.

Macbeth begins to wander how he will ever become the king if Scotland. He firstly thinks that he would have to kill Duncan to become king, but quickly talks himself out of this. "If chance will have me king, why, chance may crown me," We feel sympathy for Macbeth at this point because we notice that he is contemplating killing the king because of what the witches said. They did not directly tell him to kill the king, yet Macbeths mind has got carried away with his ambition. People at the time of Shakespeare believed that witches were evil, meddling with super natural. Therefore, they would feel sympathy for him, as they believed that witches were not something to put your trust in. The technique used to create most sympathy for Macbeth is through the soliloquies. This helps to let the audience know what he is feeling inside his head rather than just understanding what is happening from an outside point of view. This exactly why Malcolm described him as a butcher, because he doesn't understand how much Macbeth is regretting and suffering. ...read more.

However at the end of the scene it conveys that Macbeth has a grim humour and is almost enjoying the horror. "The bell invites me. Hear it not, Duncan; for it is a knell That summons thee to heaven, or to hell" Shakespeare uses rhyming in this speech, as it cleverly bodes body to death with the rhyming "knell" and "hell". The audience expects Macbeth to die in the play as he has committed the worst act possible, the killing of the King. This crime is called regicide and was considered so terrible because the audience of Shakespeare's time believed that God appointed the kings and so the king ruled by Divine Right. Overall, Shakespeare uses a variety of different techniques to create sympathy for the villain in the story, Macbeth. He creates sympathy through other characters, through imagery but most of all, through Macbeth himself. Macbeth's soliloquies are the key to the audience feeling sympathy for Macbeth because it gives you an insight into what he is really feeling rather than how he appears from an outside view. We experience his doubts, his ideas and his fears throughout the play. We see how he really feels when on the outside he gives a different impression. ...read more.

The writer has a range of valid points to make with reference to whether the audience can feel sympathy for Macbeth.
However, the essay structure is rambling. The soliloquies are not clearly identified or set in context and the expression is often vague and marred by errors of punctuation.
***