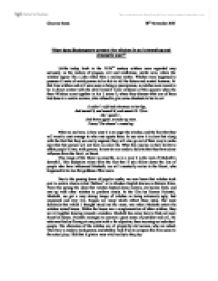 How does Shakespeare present the witches in an interesting and dramatic way?

'How does Shakespeare present the witches in an interesting and dramatic way?' Unlike today, back in the 15/16th century witches were regarded very seriously, as the inciters of plagues, evil and misfortune, unlike now, where the witches appear like a joke rather than a serious matter. Witches were supposed to possess all sorts of weird powers to be able to tell the future and control humans. At that time witches and evil were seen as being a synonymous, as witches were meant to be in direct contact with the devil himself. Clear evidence of this appears when the three Witches come together in Act I, scene 3; where they discuss what one of them had done to a certain woman, who refused to give some chestnuts to her to eat: A sailor's wife had chestnuts in her lap, And munch'd, and munch'd, and munch'd: 'Give Me,' quoth I... And thrice again, to make up nine. Peace! The charm's wound up. What we see here, is how easy it is to anger the witches, and the fact that they will want to cast revenge to who ever upsets them. ...read more.

Hover through the fog and filthy air.' As you can see in this quotation, what Shakespeare was trying to convey was the sense of evil and putridity. That all three witches say this at the same time gives the audience a sense of anticipation, not actually knowing what is happening, anxious for more. Although this was the original expectations that Shakespeare desired, in Macbeth, by Roman Polanski, a different opening is proposed. There is no thunder, rain and it is not shot at night. Polanski presents a beach shot where the three witches meets together and cast a spell on a poor soul. We see the camera panning in form a distance on the three figures of the witches. The wind is blowing, and it seems to be early morning, and I felt a sense of uncertainty, I did not really understand what was happening. We then see the three witches' faces, disfigured, scared. Truly unholy sights as they perform a spell of some sort. In my view this was done, as now a days the same effect probably cannot be reproduced. But Polanski manages some amazing camera shots which really catch the moment and the feelings. ...read more.

All the events have had some sort of influence by the witches, so one could say the witches are the creators of the tragedy of Macbeth. But the reason why the witches actually introduced themselves to the play was, in my view, is the best way for Shakespeare to show how the inner conscience is able to take control over someone. And the witches are merely metaphors of what happens within Macbeth's head. This may seem in some way to be applicable but does not actually give reason for the fact that Banquo had also seen them. This therefore makes me think whether there isn't just another and more subtle meaning to the play. By looking at it now, with a further understanding and having analysed it, I get the impression the play revolves around the idea of power. Banquo, in my view must have felt something as well when he heard that one of his descendants would become king. So in a way he too must have had some sort of ideas running through his head, which seems likely as he to was a fine worrier and didn't quite understand why all this 'luck' was appearing before Macbeth. But probably the defining factor was their personality. The witches must have seized these little factors and gave them different futures. Giacomo Rossi 18th November 2001 ...read more.