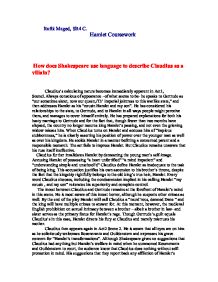 How does Shakespeare use language to describe Claudius as a villain?

Rafik Maged, SR4 C. Hamlet Coursework How does Shakespeare use language to describe Claudius as a villain? Claudius's calculating nature becomes immediately apparent in Act1, Scene2.Always conscious of appearance -of what seems to be- he speaks to Gertrude as "our sometime sister, now our queen,/Th' imperial jointress to this warlike state," and then addresses Hamlet as his "cousin Hamlet and my son". He has considered his relationships to the state, to Gertrude, and to Hamlet in all ways people might perceive them, and manages to cover himself entirely. He has prepared explanations for both his hasty marriage to Gertrude and for the fact that, though fewer than two months have elapsed, the country no longer mourns king Hamlet's passing, and not even the grieving widow misses him. When Claudius turns on Hamlet and accuses him of "impious stubbornness," he is clearly asserting his position of power over the younger man as well as over his kingdom. He scolds Hamlet in a manner befitting a concerned parent and a responsible monarch. The act fails to impress Hamlet. But Claudius remains unaware that his ruse itself ineffective. Claudius further invalidates Hamlet by demeaning the young man's self-image. Accusing Hamlet of possessing "a heart unfortified" "a mind impatient" and "understanding simple and unschool'd" Claudius define Hamlet as inadequate to the task of being king. This accusation justifies his own ascension to his brother's throne, despite the fact that the kingship rightfully belongs to the old king's true heir, Hamlet. Every word Claudius chooses, including the condescension implied in his calling Hamlet "my cousin , and my son" reiterates his superiority and complete control. The incest between Claudius and Gertrude remains at the forefront of Hamlet's mind in this scene. He is most aware of this incest horror, although he suspects other crimes as well. By the end of the play Hamlet will call Claudius a "murd'rous, damned Dane " and the king will have multiple crimes to answer for. ...read more.

By exercising his skill with posturing emotions, Claudius convinces Laertes that he has restrained his actions toward Hamlet for reasons that make him look like a kind man and a responsible monarch. The speech wins Laertes over and Claudius gains a powerful ally. Now that his plan to Hamlet executed by the English king has failed, Claudius needs Laertes' assistance in eliminating Hamlet. The two hatch a grand scheme to ensure that Hamlet will not escape again. As in the murder of king Hamlet, undetectable poison serves as the weapon of choice for Claudius. Like his malicious intentions, which he masks with sweet sentiments, Claudius' penchant for poison proves his insidiousness. Hamlet's statement in his letter that he has returned "naked" to Denmark leads to the conclusion that he will face Claudius alone. The conspirators have every reason to expect success in their plot especially as Laertes is as renowned for his swordsmanship as is Hamlet. Claudius evil ambition has infected Laertes, despite the fact that Laertes has been in Paris, away from Claudius' influence. Hamlet has returned to put right what he perceives as Claudius' wrongs, but by causing the deaths of Polonius and Ophelia, Hamlet has become an evil of the evil he opposes. That something is "rotten in the state of Denmark," as Marcellus observed in Act2, is now clear throughout the kingdom. Claudius also proved that he is a chance hunter, he hunted the chance of Laertes' sadness for the death of his sister and father he convinced Laertes to become his ally and now he will not face Hamlet alone. Just as he did before when he hunted the chance that Hamlet was out of Denmark and killed King Hamlet and became he himself King of Denmark. Throughout the play he proved that he wanted to be totally independent, he thought alone and had no friends. In the last scene Claudius' directive becomes a pivotal moment. ...read more.

The crime Claudius is the central action around which the play revolves because if there was no crime there would be no ghost so no revenge so we would have no play. Throughout the play Claudius is contrasted with king Hamlet and he is presented as a symbol of evil. Elizabethan belief is that any body, which goes against natural order has to be punched and therefore Claudius has to pay with his life. He killed his own brother, he killed the king of the country and lawfully became the king, and this was against natural order. Claudius does not commit evil carelessly he knows that what he has done or is doing is wrong but he is willing to sacrifice his ethics to obtain his goal. He is strong minded, patient and very purposeful he makes his plans very carefully and proceeds according to them. He shows and intelligent, he is fully aware of Hamlet suspicions and also the reason of Hamlet's supposed madness. Only on two occasions does Claudius show anything of conscience one in a site Polonius's description of Ophelia and another is his soliloquy while he is praying , even in these occasions he is unwilling because for him carrying out his resolution is very very important. Claudius is calculating, ambitious and rather less in his pursuit of power. It is these qualities along with Hamlet's uncertain that delays his death, at the end Claudius accusation exposes him as a true villain. Claudius is much manipulated. He uses Hamlet's friends against him and plots that Hamlet would be killed away from Denmark so that it would not affect his position. Claudius is a symbol of rottenness that Hamlet sees in Denmark. In the same time Claudius has several good qualities; he is intelligent, reasonable and is a competent and able to take decisions of kings. The dramatic relation between Hamlet and Claudius is the action around which the action of the play turns and it is the conflict and tension between them that is very important to our study for the play. ...read more.