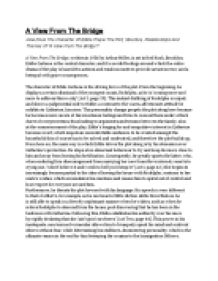 How Does The Character Of Eddie Propel The Plot, Structure, Relationships And Themes Of A View From The Bridge?

﻿A View From The Bridge How Does The Character Of Eddie Propel The Plot, Structure, Relationships And Themes Of ?A View From The Bridge?? A View From The Bridge, written in 1956 by Arthur Miller, is set in Red Hook, Brooklyn. Eddie Carbone is the central character, and it is sordid feelings around which the entire drama of the play is based. His actions and emulous motives provoke arrant sorrow and a betrayal with grave consequences. The character of Eddie Carbone is the driving force of the plot. From the beginning, he displays a certain dismissal of the youngest cousin, Rodolpho, as he is ?coming more and more to address Marco only? (Act I, page 29). This instant disliking of Rodolpho is unjust, and shows a judgemental side to Eddie; a contrast to the warm, affectionate attitude he exhibits to Catherine, his niece. This personality change propels the plot along here because he becomes more aware of his incestuous feelings and tries to conceal them under a thick duvet of overprotection, thus leading to arguments and tension between the family. Also at the commencement of the play, Eddie?s longing for and compulsive interest in Catherine becomes overt, which impels an uncomfortable ambience to be created amongst the household; this of course has to be solved and confronted, and therefore the plot builds up. ...read more.

As he begins to accept this realization, the structure becomes clearly laid out in a series of events; Eddie?s confrontation of the couple, his betrayal of the family to seek revenge, his refusal to act contrite, and his death. Thus, it is because of him and the methods in which he deals with his awareness that propels the structure of A View From The Bridge. Eddie Carbone additionally adjusts the relationships of the play as he progressively begins to destruct each alliance he knows. The first friendship he ravages is the one between himself and Catherine. Subconsciously, he reveals his feelings towards her by openly disapproving of her intimacy with his wife?s cousin, which alarms her, hauling her out of her comfort zone and the special understanding the two of them share, and into an unfamiliar world in which she has to be careful about how she dresses and acts around him. The more conscious she becomes of the way he thinks about her, the more she speaks in shorter, sharper sentences, such as, ?Cause I did.? and ?No, I made up my mind.? - clear signs to show that the bond between them is gradually falling apart; she no longer makes an effort to reason with him. ...read more.

them (such as when he finalizes that he ?don?t want no more conversations about that?), and is consequently a very complicated character, which potentially is the reason for the disloyalty he performs at the end. Another theme explored by Miller which Eddie sets in motion is loyalty verses betrayal. In the early stages of the play, Eddie is seen warning Catherine how she must never inform on the cousins to anyone, and recounts a case in which someone did betray their family, with horror. ?How?s he gonna show his face?? (Act One, page 24), he asks her with disdain. This automatically creates a subtle curiosity as to Eddie?s evident strong beliefs for loyalty, and thrusts forward this theme as something the viewer is intrigued to learn more about. And so, they do, and it is with great irony that Eddie?s ending action is to deceive the cousins with bitter jealousy and craze from his irrepressible yearnings, thus resulting in his dismissal from the community, and finally, death. Therefore, it can be concluded that the main character, Eddie Carbone, is without doubt the driving force of all the essential factors in A View From The Bridge, without whom it would have little to encourage its flow at all. ...read more.