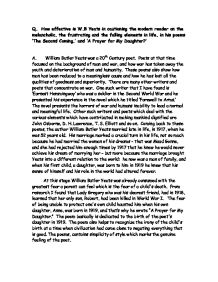 How effective is W.B Yeats in cautioning the modern reader on the melancholic, the frustrating and the falling elements in life, in his poems 'The Second Coming,' and 'A Prayer for My Daughter?'

Q. How effective is W.B Yeats in cautioning the modern reader on the melancholic, the frustrating and the falling elements in life, in his poems 'The Second Coming,' and 'A Prayer for My Daughter?' A. William Butler Yeats was a 20th Century poet. Poets at that time focused on the background of man and war, and how war has taken away the youth and deterioration of man and humanity. These poems also show how man has been reduced to a meaningless cause and how he has lost all the qualities of goodness and superiority. There are many other writers and poets that concentrate on war. One such writer that I have found is 'Earnest Hemmingway' who was a soldier in the Second World War and he presented his experience in the novel which he titled 'Farewell to Arms.' The novel presents the horrors of war and humans inability to lead a normal and meaningful life. Other such writers and poets which deal with the various elements which have contributed in making mankind dignified are John Osborne, D. H. Lawrence, T. S. Elliott and so on. Coming back to these poems, the author William Butler Yeats married late in life, in 1917, when he was 52 years old. His marriage marked a crucial turn in his life, not so much because he had married the woman of his dreams - that was Maud Gonne, and she had rejected him enough times by 1917 that he knew he would never achieve his dream of marrying her - but more because the marriage brought Yeats into a different relation to the world: he now was a man of family, and when his first child, a daughter, was born to him in 1919 he knew that his sense of himself and his role in the world had altered forever. At this stage William Butler Yeats was already consumed with the greatest fear a parent can feel which is the fear of a child's death. ...read more.

There is also a warning here - a warning that is particularly relevant for a poet who had been entranced by his wife Maud Gonne. Here we see that Yeats knows that an excess of beauty is destructive and she maybe threatened in society not through her fault, but through the fault of men who value woman's beauty too greatly. He also knows that beauty doesn't make a person complete. Here Yeats asks that his daughter be spared a beauty that may come between her and "natural kindness," ("Lose natural kindness and maybe the heart-revealing intimacy") that might prevent her from finding "heart-revealing intimacy" and a true friend. There is also a word in the stanza 'distraught,' and this shows that his mind was troubled by these factors. The next stanza has references to the god and goddesses of love. It starts with Helen and she was famous because of her beauty and secondly Paris abducted her. As he says 'Helen being chosen found life flat and dull and later had much trouble from a fool' I think that from this line he is trying to tell us about Helen of Troy who was a very beautiful person. Her beauty caused political unrest which in turn caused a war thus proving that too much beauty could cause hatred, enmity, individualism and so on and so he is trying to reflect this idea in the poem. But beauty is a gift from God and therefore must be used well. I feel that here Yeats is also trying to tell us that Gods given talent could certainly change the thinking of people in many ways indicating the power of one and how just one individual could mould society in many different ways. The stanza also has a reference to Aphrodite, the goddess of love, who chose for her spouse the cripple, Hephaestus. This shows that as Aphrodite suffered from "being fatherless," hence without a father to guide her, we understand that Yeats intended to be a guiding father to his young daughter. ...read more.

The word "beast" ("That twenty centuries of stony sleep were vexed to nightmare by a rocking cradle, And what rough beast, its hour come round at last") scares the reader in the sense that, the beast will come to devour and destroy. I feel this is a warning to the reader interpreting that the end is near and we should be ready for what is going to come in the future. Man isn't using Gods gifts well which is leading to his deterioration and end. The last line, ("Slouches towards Bethlehem to be born?") leaves the reader with an unanswered question so that he/she can look back and reflect the current issues on themselves. Bethlehem was also the place Jesus was born indicating that this poem is relating to the coming of Christ. Through the last stanza of 'A Prayer for My Daughter,' Yeats provides in the concluding stanza his vision for the comic ending he desires to his daughter's story in the classic sense, a story that will conclude in the rituals of the marriage, as he talks about bride groom and so on. This is his wish which he is expressing showing exactly what parents wish for their children when they grow up. The question which follows makes the reader look back at their own lives and makes them pause for a moment thinking of what all goes on in the world today again having a link to the "Second Coming." At the end of it all Yeats returns to the image of the horn, now not as a treasure that is wasted, but as the very source of these nurturing and enriching values that he hopes will restore the world, again expressing his care and concern for society. The poems very carefully bring out the elements that affect our world today. Though relations made to the war aren't clear, the style through which it is written in brings out this effect. Both also imply the deterioration of man quite clearly. ...read more.