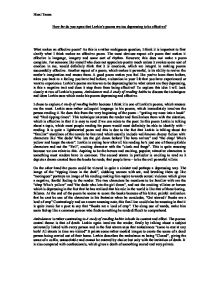 How far do you agree that Larkin's poems are too depressing to be effective?

How far do you agree that Larkin's poems are too depressing to be effective? What makes an effective poem? As this is a rather ambiguous question, I think it is important to first clarify what I think makes an effective poem. The most obvious aspect of a poem that makes it effective is language, imagery and some sort of rhythm. However, this does not make a poem complete. For someone like myself who does not appreciate poetry much unless it evokes some sort of emotion in me, would definitely think that it is emotions, which are integral in making poems successfully effective. Another aspect of a poem, which makes it powerful, is its ability to revive the reader's imagination and amuse them. A good poem makes you feel like you've been there before, takes you back to a feeling you have had before, a situation in your life that you have experienced or want to experience. Larkin's poems are known to be depressing but to what extent are they depressing, is this a negative trait and does it stop them from being effective? To explore this idea I will look closely at two of Larkin's poems, Ambulances and A study of reading habits to discuss the techniques and ideas Larkin uses which make his poems depressing and effective. ...read more.

not the exciting villains or heroes which is depressing in the fact that he has realised that his role in the world is like that of these boring, failures. At the end of the poem he seems to scorn the books because of his bitter, painful realisation that he cant be one of the characters in his fantasies when he concludes, "Get stewed:/ Books are a load of c**p" Contrastingly and on a more amusing note, this final line could also be amusing in that it is quite ironic for a poet to say that "Books are a load of c**p". The slang use of words, make him seem fed-up like a common person who finds something he reads difficult to comprehend. Ambulances is rather contrasting to A study of reading habits in both its content and effect. The poems central theme is that of death. Larkin again involves the reader, firstly by talking about a subject universally linked with every person and in the first stanza says that ambulances "come to rest at any kerb/ All streets in time are visited" It paints some rather morbid images to create the scene of a dead person being carried out of their home. ...read more.

where Larkin looks at the extent to which people go to feel a kind of love or hope, talking of their responses to the "healing" as universal and fake. The prime example of this I can think of is his poem, The Whitsun Weddings, which shows several people going through the same process of getting married, believing that it is something individual and special, when in fact every wedding is the same. It shows that people's lives are all a train journey, going the same route and then ending at the same point. To conclude I don't agree with the statement that Larkin's poetry is too depressing to be effective as I think that it is its morbidity which makes it so successful. A poem, which can evoke strong emotions in the reader, is effective, and Larkin shows that he is capable of doing so. He uses images and language to create saddening and sometimes revolting images, being open about the imperfections of life. One of the aspects of his poetry that people find "depressing" is his theme of death, which he includes so openly and effectively, making us think about the absurdity of our actions that try to cover up the acknowledgment of out eventual end and showing us that death is a part of our everyday lives. Hinal Tanna ...read more.