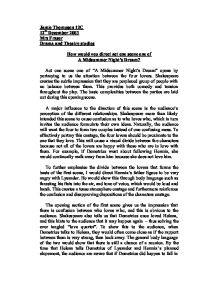 How would you direct act one scene one of A Midsummer Night's Dream?

Jamie Thompson 12C 12th December 2003 Mrs Fraser Drama and Theatre studies How would you direct act one scene one of A Midsummer Night's Dream? Act one scene one of "A Midsummer Night's Dream" opens by portraying to us the situation between the four lovers. Shakespeare creates the subtle impression that they are perplexed group of people with no balance between them. This provides both comedy and tension throughout the play. The basic complexities between the parties are laid out during this opening scene. A major influence to the direction of this scene is the audience's perception of the different relationships. Shakespeare more than likely intended this scene to cause confusion as to who loves who, which in turn invites the audience formulate their own ideas. Naturally, the audience will want the four to form two couples instead of one confusing mess. To effectively portray this onstage, the four lovers should be proximate to the one that they love. ...read more.

To show this to the audience, when Demetrius talks to Helena, they would often come close as if the rapport between them is very strong, then back away. The general body language of the two would show that there is still a chance of a reunion. By the time that Helena tells Demetrius of Lysander and Hermia's planned elopement, the audience are aware that if Demetrius did happen to fall in love with Helena again, all would be well. This makes the audience want them to get back together. In order to bring out the comedy in this scene, I would direct the lovers to be very serious: overly deep and preoccupied with their own feelings. The inflated characters taking the ludicrous situation seriously would be comical. The fact that they are selfish and are only concerned with their own feelings in this scene also adds to the comic value. They are funny, however, singularly - they don't involve relationships with any other character in order to be comical. ...read more.

Secondly, she reacts by mocking Helena - "Thou painted maypole". These lines are intrinsically humorous, so using obvious angry facial expressions and perhaps grabbing each other as if to fight would bring out the comic value of the segment. Demetrius is willing to see Hermia executed to prevent her from marrying another man, and Lysander appears to think of himself as a hero in a love story: he is egotistical and pretentious. It is ironic that eh thinks of himself as heroic because he is in fact, the opposite. In order to show Lysander's naivety and contrast to Demetrius, I would direct him to appear less intelligent than the others. My dramatic intentions in this scene would be to present to the audience the confusion between the four lovers onstage in act one scene one. The main method I would use to do this would be to ensure a contrast between those that do not love each other, which would be shown through negative body language and stage positioning that portrays they do not want to be near each other. ...read more.