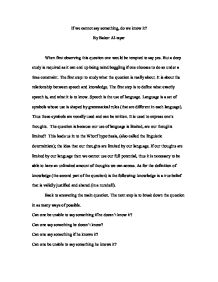 If we cannot say something, do we know it?

If we cannot say something, do we know it? By Bakor Al-tayar When first observing this question one would be tempted to say yes. But a deep study is required as it can end up being mind boggling if one chooses to do so under a time constraint. The first step: to study what the question is really about. It is about the relationship between speech and knowledge. The first step is to define what exactly speech is, and what it is to know. Speech is the use of language. Language is a set of symbols whose use is shaped by grammatical rules (that are different in each language). Thus these symbols are vocally used and can be written. It is used to express one's thoughts. The question is because our use of language is limited, are our thoughts limited? This leads us in to the Whorf hypothesis, (also called the linguistic determinism); the idea that our thoughts are limited by our language. ...read more.

Therefore: one CANNOT say something he doesn't know (which answers the first two questions). For instance try to say what a child in Nicaragua is doing right now; you can't because you don't know. Can one say something he knows? Of course, that is why we have language. If we were unable to say things we know then we wouldn't be able to communicate at all. We know certain things and are able to express them, but all things aren't easy to express. Thus this leads us to the main question: can one be unable to say something he knows? Certain things have one word that directly belongs to those things, most of the time it is because these things are objective concepts (if I say: dog, one would automatically recognize what it is). But what about those things that are subjective? Such as the theory of the unconscious, it is hard to say what it is exactly but one can describe it and thus still manage to express him/herself. ...read more.

Smells are hard to describe as well, but they do invoke certain feelings and thoughts. Thus perfumery is an art as well that can be used to communicate certain ideas. Music, art, and perfumery shouldn't be used as a major mean of communication as they do not describe with ease the things the everyday language does. But they do describe things the everyday language cannot describe. Thus each mean of communication should be used at a separate time. But in order to communicate one should also be able to recognize, and apply knowledge. One cannot know what exactly is blue if he/she cannot recognize it, just as one cannot know a math formula without being able apply it to different problems. Thus a basis should be made where blue is blue to all people, and a math formula (1+1=2) is accepted and understood by all people. This Thus provides a valid form of communication where one recognizes (understands) other's mean of communication (art, language, math etc). Even though many of us speak different languages we can still manage to understand each other. Word count- 898 words ...read more.