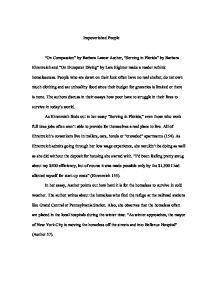 Impoverished People "On Compassion" by Barbara Lazear Ascher, "Serving in Florida" by Barbara Ehrenreich and "On Dumpster Diving" by Lars Eighner make a reader rethink homelessness. People who are down on their luck often have no real shelter, do not own much clothing and eat unhealthy food since their budget for groceries is limited or there is none. The authors discuss in their essays how poor have to struggle in their lives to survive in today's world. As Ehrenreich finds out in her essay "Serving in Florida," even those who work full time jobs often aren't able to provide for themselves a real place to live. All of Ehrenreich's coworkers live in trailers, cars, hotels or "crowded" apartments (154). As Ehrenreich admits going through her low wage experience, she wouldn't be doing as well as she did without the deposit for housing she started with. ...read more.

Even though, he put all of his money into rent and tried to survive by getting supplements by dumpster diving after a period of time he landed on the street anyway ( Eighner 162). In a human being's life shelter plays one of the most important roles. Unfortunately, as all of the authors conclude, it is more difficult to maintain a house as it may seem to many, especially to those who live secure lives in the upper or middle class. More fortunate people have access to deposit for housing, unlike the poor who have to struggle hard to provide for themselves a place to live. Food is another crucial aspect of humans' lives. Ehrenreich gives in her essay example of people who can't afford kitchen supplies, thus aren't able to cook nutritious food. They end up eating "fast food or hot dogs or Stryrofoam cups of soup that can be microwaved in a convenience store" (Ehrenreich 155).Ascher notices, homeless often get food from kind human beings. ...read more.

As Ehrenreich writes, her coworkers' clothes other than those required for work comes from thrift shops (154). Moreover, Asher gives a clear picture of a homeless person, "a buttonless shirt, with one sleeve missing, hangs outside the waist of his baggy trousers" (56). The authors prove in their essays that the poor do not own much clothing; obviously, they usually have no place to keep it or/and no money to buy it. All three authors seem to define impoverished people in a similar way. They all prove how tremendously the poor have to struggle in their lives to get basic needs to live (like shelter, food and clothing). Also, each one of three essays seems to be a reminder to all the people who have forgot about humanity and care less about unfortunate human beings. Hopefully, reading those essays will influence and inspire at least some people so the society can finally start a real fight against poverty. ...read more.