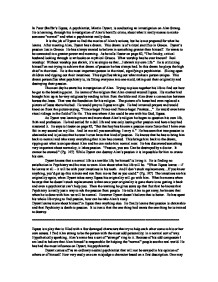 In Peter Shaffer's Equus, A psychiatrist, Martin Dysart, is conducting an investigation on Alan Strang.

In Peter Shaffer's Equus, A psychiatrist, Martin Dysart, is conducting an investigation on Alan Strang. He is learning, through his investigation of Alan's horrific crime, about what it really means to make someone "normal" and what a psychiatrist really does. It is the job of Dysart to find the motive of Alan's actions, but he is not prepared for what he learns. After meeting Alan, Dysart has a dream. This dream is of a ritual sacrifice in Greece. Dysart's passion lies in Greece. He has always wanted to believe in something greater than himself. He wants to be connected to a greater power and meaning. As he tells Hester on page 82, "The finicky, critical husband looking through is art books on mythical Greece. What worship has he ever known? Real worship! Without worship you shrink, it's as simple as that...I shrank my own life." He is criticizing himself on not trying to achieve that dream of passion he has always had. In this dream he plays the high chief in the ritual. He is the most important person in the ritual, signifying a psychiatrist. Slicing open children and ripping out their intestines. This signifies taking out what makes a person unique. This dream personifies what psychiatry is, its fitting everyone into one mold, taking out their originality and destroying their passion. ...read more.

Then in the morning, I put away my books on the cultural shelf, close up the kodachrome snaps of Mount Olympus, touch my reproduction statue of dionysus for luck- and go off to the hospital to treat him for insanity. Do you see?" (Dysart 82) HA HA. And the tides have turned. Dysart is finding himself, a self that he had never known to exist, in a patient who he is treating for insanity. Alan has become his role model. He has showed Dysart a world where one can "undress completely in front of the horse. When he is finished, and obviously quite naked, he throws out his arms and shows himself fully to his God." His passion for horses has opened a dimension of fantasy in the life of Dysart. He has brought to Dysart a new perspective to which one may live his life. A life in which Dysart had in the past taken so seriously: not to let loose and enjoy himself. Alan's "strangeness" has contributed a great deal to the plain and normal life of Dysart. Without Alan's interference Dysart may have never come to the realization that his own life was rather pointless and boring. Although he never directly mentions this feeling, it can be perceived based upon his thoughts. ...read more.

says himself that life is only understandable through a thousand Gods and one should worship as many as they can see to understand life better. That is precisely what Alan was doing. He formed and worshiped Equus so that he couldn't understand the world around him and understand himself. Equus, with his resemblance to Jesus, was an attempt to deal with religion around him. Words like jodhpurs, or becoming one with the horse, were Alan reacting to his mother's stories. The Chinkle Chankle in the horses' mouth was a reaction to the memory of Trojan on the beach. All these things that Alan could comprehend made sense in Equus. Dysart admits this on page 81 "I only know that it's the core of his life. What else has he got? ...Many men have less vital with their wives" Equus is the core of Alan's life, and Dysart knows that. Equus is that heart of Alan's body. If the heart is removed the body cannot continue to live. Dysart was wrong to remove Equus from Alan. He was wrong to kill the passions that he envied so much. All this for what? Normalcy. Dysart did not heal Alan he ravaged him. In a world devoid of passion, it is the most important thing one can have. Every day people go about their ways passionless and now Alan joins them. ...read more.