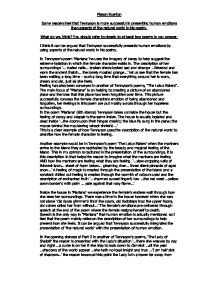 In Tennyson's poem 'The Lady of Shalott', I feel that he has successfull

I think it can be argued that Tennyson successfully presents human emotions by using aspects of the natural world in his poetry. In Tennyson's poem 'Mariana' he uses the imagery of decay to help suggest the extreme isolation in which the female character exists in. The description of her surroundings '... rusted nails... broken sheds looked sad and strange ...Weeded and worn the ancient thatch... the lonely moated grange...' let us see that the female has been waiting a long time - such a long time that everything around her is worn, dreary and old, just as she feels. Feeling has also been conveyed in another of Tennyson's poems, "The Lotus Eaters". The main focus of "Mariana" is on helping to creating a picture of an abandoned place and the idea that this place has been forgotten over time. ...read more.

'...slow-dropping veils of thinnest lawn... sheet of foam below... gleaming river... three silent pinnacle of aged snow...' A feeling of magic is created through the presentation of the island and a constant chilled out feeling is created through the warmth of colours used and the description of enchanted fruit: '...charmed sunset linger'd low ...the red west ...yellow down border'd with palm ... pale against that rosy flame...' Inside the house in 'Mariana' we experience the female's endless wait through how she sees her surroundings. There was a time in the house however when she was not alone 'Old faces glimmer'd thro' the doors, old footsteps trod the upper floors, old voices called her from without...' The female's emotions are delivered through speech at the end of the poem where the female resigns herself to death. Speech is the only way in "Mariana" that human emotion is actually mentioned so I feel that the poem mainly relies on the description of her surroundings to help present how she feels. ...read more.

The use of the weather implies the severity of the curse and the desperation the Lady is feeling. The moment the Lady sets her art aside to look upon Lancelot, she is seized with death and in part 4 all the colour from Part 3 gives way to "pale yellow" and "darkened" eyes, and the brilliance of the sunlight is replaced by a "low sky raining." I think that Tennyson's presentation of the worlds in each of his poems is vital for how he presents the emotions of his characters. He is successful in using them both together and I think that what makes his poems interesting is that he doesn't rely on just one but uses the natural world to help present human emotion. ?? ?? ?? ?? Mason Egerton Some readers feel that Tennyson is more successful in presenting human emotions than aspects of the natural world in his poetry. What do you think? You should refer to closely to at least two poems in you answer. ...read more.