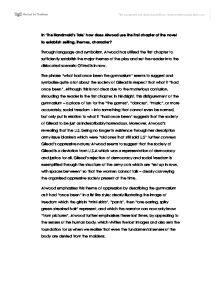 In 'The Handmaid's Tale' how does Atwood use the first chapter of the novel to establish setting, themes, character?

In 'The Handmaid's Tale' how does Atwood use the first chapter of the novel to establish setting, themes, character? Through language and symbolism, Atwood has utilised the first chapter to sufficiently establish the major themes of the play and set the reader into the dislocated scenario Offred is in now. The phrase "what had once been the gymnasium" seems to suggest and symbolise quite a lot about the society of Gilead in respect that what it "had once been". Although this is not clear due to the mysterious confusion, shrouding the reader in the first chapter, in hindsight, this disfigurement of the gymnasium - a place of fun for the "the games", "dances", "music", or more accurately, social freedom - into something that cannot even be named, but only put in relation to what it "had once been" suggests that the society of Gilead to be just as indescribably horrendous. Moreover, Atwood's revealing that the U.S. being no longer in existence through her description army-issue blankets which were "old ones that still said U.S" further conveys Gilead's oppressive nature; Atwood seems to suggest that the society of Gilead is a deviation from U.S.A which was a representation of democracy and justice for all. ...read more.

as spies on each other for the regime, but still with the Aunts around to enforce their manipulative rhetoric upon the women; which consequently grants result with the maiden's thought "where I am is not a prison but a privilege". The patrolling of the Aunts in the opening chapter symbolises yet again the oppressive and tyrannical system the society governs itself upon and conveys what women are seen as in the society - mere cattle. Their existence is governed by their masters, and just as cattle are bred to be eaten, a women's purpose is to procreate. This dismal outlook upon the purpose of women portrays the emotionless and usually, brutal nature of the system. s****l discrimination and subjugation is even shown towards the Aunts who cannot have guns because they "could not be trusted with guns". This lack of trust consequently leads to lack of power and inevitable lack of independence. The general atmosphere of s*x is prevalent throughout the novel and is conveyed through the maidens' "fantasy" to "trade-off" their bodies so that "something could be exchanged". ...read more.

In the "soul scrolls" scene further on in the novel, there is a clear problem with religion being mechanised and controlled by the state. It has lost its essence just as the woman has lost theirs. This comparison between women and religion seem to further exemplify the extent of the Gilead's oppressive power. Even though such a dismal outlook is portrayed in the opening chapter, there is still hope, or rather some sort of action against the system, no matter how small. Offred - and the rest of the maidens - show signs of rebellion by touching "each other's hands across space" and talking to each other through "lip-read". This sense of prevailing independence the women have no matter how horrible the situation grants some respect back to the women who seem to be so willing to conform to the regime. This initial characterisation of Offred as a slight rebel is further enforced throughout the novel by her little rebellious actions and her outstanding one - being the affair with the officer. Atwood cleverly ends the chapter with a list of names of the women - clearly signifying their grasp on their identity, power and independence, no matter how little. ...read more.