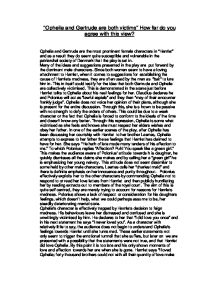 &quot;In the play Hamlet, Ophelia and Gerturde are both victims&quot; How far do you agree with this view?

"Ophelia and Gertrude are both victims" How far do you agree with this view? Ophelia and Gertrude are the most prominent female characters in "Hamlet" and as a result they do seem quite susceptible and vulnerable in the patriarchal society of Denmark that the play is set in. Many of the ideas and suggestions presented in the play are put forward by the dominant male characters. Since both women seem to have a loving attachment to Hamlet, when it comes to suggestions for establishing the cause of Hamlets madness, they are often used by the men as "bait" to lure him in. This in itself could testify for the idea that both Gertrude and Ophelia are collectively victimised. This is demonstrated in the scene just before Hamlet talks to Ophelia about his real feelings for her. Claudius declares he and Polonius will act as "lawful espials" and they then "may of their encounter frankly judge". Ophelia does not voice her opinion of their plans, although she is present for the entire discussion. Through this, she is shown to be passive with no strength to defy the orders of others. This could be due to a weak character or the fact that Ophelia is forced to conform to the ideals of the time and doesn't know any better. ...read more.

Hamlet says "I loved Ophelia; forty thousand brothers could not with all their quantity of love make up my sum." Thereby defying everything he has said to her before. In this situation, Ophelia has become the helpless victim, her lover murders her father and says he doesn't love her and she is left alone and helpless when he is sent away to England. Her madness however provokes some insight into Ophelia's inner most feelings, the only time we really learn anything about her character. Behind the poetic words of her song seems to lie plausible meaning "How should I your true love know" and "And I a maid at your window, to be your valentine" seems to show for the first time some of her feelings of love and longing for Hamlet. Whereas "He is dead and gone; At his head a grass- green turf, at his heels a stone." seems to be a blatant reference to her fathers recent death, the appearance of these two matters in her mad evoked sing-song seems to indicate further the importance of them to her and demonstrates that she has now become a victim of her own feelings. Her weak character allows her to succumb to her bout of emotions rather than allowing her to get along with her life, her death signifies her character being finally engulfed by this. ...read more.

Following his murder of Polonius, she is harrowed by what she has witnessed and seems to succumb to all ideas presented to her regarding him, even his being sent away to England. Despite her helplessness, Gertrude has attempted to gain some control over the political standing of Denmark when King Hamlet dies. To some degree she has remarried not only to keep her position (or perhaps to fulfil possible desires for Claudius) but in an attempt to keep her beloved country from falling into disarray under an entirely new monarchy. She is a weakened character but she is also devoted and concerned for the well being of others and of her nation. Gertrude, like Ophelia, is a victim of Hamlet's madness, however she pulls through better and this may be contributed to her maturity or the arguable point that she doesn't suffer as much as the young Ophelia. In conclusion, Shakespeare has produced two somewhat vulnerable and slightly passive female characters. They are certainly both the subject of victimisation and this is predominantly caused by the oppression and grief they face from members of the opposite s*x, particularly Hamlet. Their representation as weak minded reinforces the ideals of the time, that the men should be strong and go out and fight and the women must be passive and obedient at home. They are victims not only of their associates but of patriarchal society. ?? ?? ?? ?? ...read more.