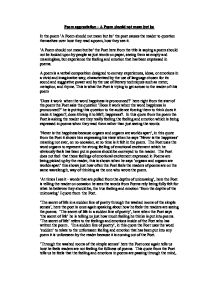 In the poem 'A Poem should not mean but be' the poet causes the reader to question themselves over how they read a poem, how they see it.

The Poet uses the word o****m to represent the strong feeling of emotional excitement which he obviously feels has been put in poems should be conveyed to the reader. The Poet does not feel that these feelings of emotional excitement expressed in Poems are being picked up by the reader, this is shown when he says 'o****m and o****m are worlds apart' this shows just how often the Poet feels the readers of poems are on the same wavelength, way of thinking as the one who wrote the poem. 'At times I see it - words that are pulled from the depths of unknowing', here the Poet is telling the reader on occasion he sees the words from Poems rely being fully felt for what he believes they should be, the true feeling and emotion 'from the depths of the unknowing' I quote from the Poet. ...read more.

'Through the washed rooms of the simple senses' here the Poet once again tells us how he feels readers are not feeling the fullness of poems. This quote from the Poet tells us he feels that the feeling and emotions in poems are passing through the mind, as 'washed rooms' he refers to it in the poem. The Poet believes the reader is unaware of how to feel the of the depths of the poem by not seeing past the words on paper, using their 'simple senses' I quote from the Poet. A Poem should not mean but be is an exceptionally well written composition which really conveys the feelings of the Poet onto the reader through by the literature used in the text. This Poem really shows the reader how much feeling and emotion is put into a poem and acknowledge the hidden depths of a poem. I found it a compelling ballad which causes much cerebration. ?? ?? ?? ?? ...read more.