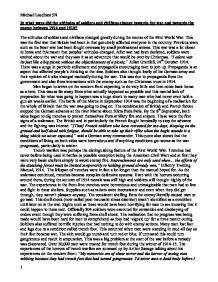 In what ways did the attitudes of soldiers and civilians change towards the war and towards the enemy between 1914 and 1918?

In what ways did the attitudes of soldiers and civilians change towards the war and towards the enemy between 1914 and 1918? The attitudes of soldiers and civilians changed greatly during the course of the First World War. This was the first war that Britain had been in that genuinely affected everyone in the country. Previous wars such as the Boer war had been fought overseas by small professional armies. This war was a lot closer to home and this meant that peoples' attitudes changed. After war had been declared, soldiers were excited about the war and they saw it as an adventure that would be over by Christmas. "I adore war. Its just like a big picnic without the objectlessness of a picnic," Julian Grenfell, 24th October 1914. There was a surge in patriotic enlistment and propaganda encouraging men to join up. Propaganda is an aspect that affected people's thinking at the time. Soldiers also thought lowly of the German army and their opinion of it also changed markedly during the war. This was due to propaganda from the government and also from interactions with the enemy such as the Christmas truce in 1914. Men began to arrive on the western front expecting to do very little and then come back home as a hero. This was as far away from what actually happened as possible and this mental lack of preparation for what was going to happen was a huge shock to many men who had never even held a gun six weeks earlier. The battle of the Marne in September 1914 was the beginning of a realisation for the whole of Britain that the war was going to drag on. The combination of British and French forces stopped the German advance at the river Marne about 50km from Paris. By the 8th September, both sides began to dig trenches to protect themselves from artillery fire and snipers. ...read more.

This took away the element of surprise. Gains were limited and extremely heavy rain caused the fields to become a muddy swamp. Many men in this battle drowned in the mud, another sight that caused men to think differently about the war. The allies became exhausted as battles continued throughout the autumn, whereas the Germans were supported by troops freed from the eastern front as Russia had left the war. This was another factor that ruined morale in 1917. Even though the offensive had been a failure, General Haig continued with it until the capture of the village of Passchendale "where the shell-exploded bodies were so thickly strewn that a fellow couldn't step without stepping on corruption." There were 700,000 allied casualties to gain the Passchendale ridge this brought more strain on the army as the gains in fact widened the Ypres salient by another few kilometres.. What was to follow, however, is what made soldiers detest war. Four months later, as a part of the 1918 spring offensives, German forces managed to push back the allies to the walls of Ypres. What had taken 100 days and 700,000 men to gain had been lost in just three days. "It achieved little except loss," Captain Liddell Hart. Civilian attitudes towards war definitely changed during the war years but did not change as much as how British soldiers did. However, civilians didn't change their feelings towards the enemy that much, if at all. I believe that it was towards the government itself and generals in the army that civilians' attitudes changed the greatest, their indifferent feelings about the war were a by-product of this change in stance and the minimal change towards the enemy irrelevant to this, as civilians never heard about the untruths that were told to them by the government until after the war. During the autumn of 1914, civilian attitudes to the war as a rule could not have been any higher, whereas attitudes towards the enemy were at the other end of the scale. ...read more.

This is due to the first-hand experiences of war for soldiers. DORA and the controls which were exerted by it were the main reason for why civilians did not learn about these experiences. The Battle of the Somme was portrayed as a victory to the British public whilst soldiers knew the true horrors that occurred. Soldiers changed their view towards the enemy greatly during the war. In 1914, they thought they were all savages due to the stories that had been fed to them by the government. They found out that this was not true, due to occurrences such as the Christmas truce of 1914. Civilians, however, did not change their opinions at all to any great extent. They had no direct contact with Germans so never found out about their true nature. Soldiers changed their attitude towards the war fairly quickly but it took civilians a long time to realise the horror of it all. First-hand experience of horrible occurrences such as trench foot and gas attacks affected nearly every soldier and some were left with medical conditions such as shell shock whilst the rest just had the horrible experiences to remember. Civilians never heard about these occurrences until after the war. Towards the end of the war, documents were leaked that showed the true extent of the war which changed their attitudes. It was mainly towards the government that civilians changed their attitude and opinion of most. Controls such as conscription were irritating for the public as they had no real impact on how the war was going to be won. The terrible experiences of the war affected mankind as a whole. It was supposed to be "The war to end all wars." It was the first modern war that had affected a great deal of the world, and, in the aftermath, lessons were supposed to have been learnt by world leaders. These lessons, unfortunately for the world, were not listened to and war started again just nineteen years later in 1939. ?? ?? ?? ?? Michael Leedham 5N 1 ...read more.