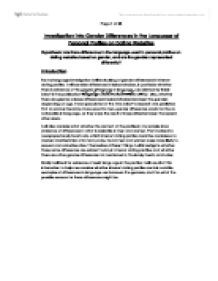 I do get attention, that isn't the issue, but it's usually the wrong kind. If I wanted to stick a trophey-girl on my arm, sure I could do that (please don't think I'm being big-headed, tons of guys can do it if they really wanted, most my age actually do) but would I want that? No, it's not me and it's not what I'm looking for. I'm a good guy with a heart of gold and I'm looking for the same in a woman, which seems to be far easier said than done! Yeah, I have my flaws and no I'm not perfect, but... I am for somebody. I'm a confident guy, but with a sensitive soul deep down and would love to meet someone that nutured that... in return they get treated like a princess, simple really! I don't care if you stack shelves or if you've got a successful career, so long as you're happy doing it. I've had my fill of women that lie or want everything their way, so if you want a good man that'll go the extra mile for you and you're a good woman that'd do the same then please feel free to get in touch. (...and please excuse the stupid face I'm pulling in the photo with my guitar, long story!) P.S. The kids in the photos are my nephews, I don't have kids but I love them as if they *were* my kids :) P.P.S. If you message I'll always answer back (sooner rather than later.) I've noticed on a few profiles people saying "If I don't reply it means I'm not interested." Well... how rude is that? I think that if you've gone out of your way to say hello that the least I can do is show you the courtesy of a reply. Appendix 7 DaftAdventures Some days you are the pigeon and some days the statue 45-year-old man Huddersfield, West Yorkshire, United Kingdom seeking women 36-46 within 40 miles of Huddersfield, West ...read more.

With an attractive, interesting friend, lover and equal partner I respect, I'm looking to invigorate my life. With someone active, romantic, tactile, open (100% honest), reasonably bright, a warm sharer, considerate and aware, sparky, sensible and spontaneous, looking to build a future - like me! If you are fairly local and can teach me to ballroom dance, too, that will be great! Independent, solvent and with no ties. Since I retired early I have lots of free time to invest in romance. (Ideally I'd like a non-smoking relationship.) I believe I'm easy-going, laid back and relaxed, wanting to stay active and enthusiastic, with an appetite for life. Open to new ideas, and activities, I enjoy changes of pace and variety. Spontaneity is good, and being unconventional at times makes a nice change. The baggage is neatly packed away, gathering dust. I retain some consistent internal values, and beliefs: that really open communication is vital, for instance. Too many agree, but lack the courage to practise it. I'm a straightforward guy as human as the next, with foibles and idiosyncrasies, looking for an opportunity for the mutual chemistry to work its magic, and to find a deep, jointly-confident relationship grows. To reciprocally want and be wanted, with the confidence and faith to trust, and the willingness to accept the implicit vulnerability. To relax together warmly and naturally, and realise "this life is good" - to both know and agree we've arrived at where we want to be, with one-another. Writing this was the easy bit; the hard part now is finding that someone who I can sweep off her feet and make her feel comfortable enough to want to share her time with me, I'm sure there is someone out there who can bowl me over! They say it is better to try, and fail, than fail to try at all. Good luck. Any Qs - just ask? ?? ?? ?? ?? Page 16 of 32 Page 17 of 32 Page 1 of 32 ...read more.