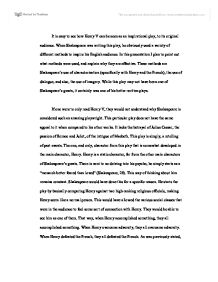 It is easy to see how Henry V can be seen as an inspirational play, to its original audience. When Shakespeare was writing this play, he obviously used a variety of different methods to inspire his English audience.

It is easy to see how Henry V can be seen as an inspirational play, to its original audience. When Shakespeare was writing this play, he obviously used a variety of different methods to inspire his English audience. In this presentation I plan to point out what methods were used, and explain why they are effective. These methods are Shakespeare's use of characterization (specifically with Henry and the French), the use of dialogue, and also, the use of imagery. While this play may not have been one of Shakespeare's greats, it certainly was one of his better-written plays. If one were to only read Henry V, they would not understand why Shakespeare is considered such an amazing playwright. This particular play does not have the same appeal to it when compared to his other works. It lacks the betrayal of Julius Caesar, the passion of Romeo and Juliet, of the intrigue of Macbeth. This play is simply, a retelling of past events. The one, and only, character from this play that is somewhat developed in the main character, Henry. Henry is a static character, far from the other main characters of Shakespeare's greats. There is next to no delving into his psyche, he simply starts as a "monarch better feared than loved" (Shakespeare, 28). ...read more.

The King was telling his followers that he considers them his equals. If we believe that Shakespeare was trying to create an experience for his audience, then we can believe that Shakespeare included lines like that to inspire his audience. While I very briefly covered some of the lines that Shakespeare added to this play to create pride in his audience, there are many more. What I am going to do is take a section of lines that Shakespeare wrote and dissect it with the sole purpose of finding the times where Shakespeare uses a line that may spark some sort of pride, or where he uses a line to inspire his audience. The section of dialogue that I am going to analyze is in Act 3 Scene 1. "Now set the teeth and stretch the nostril wide, Hold hard the breath, and bend up every spirit To his full height. On, on, you noblest English, Whose blood is fed from fathers of war-proof, Fathers that like so many Alexanders Have in these parts from morn till eve, fought, And sheathed their swords for lack of argument. Dishonour not your mothers; now attest That those whom you called fathers did beget you. ...read more.

The last method that Shakespeare uses is imagery; however, I will be speaking about animal imagery specifically. I used a quotation previously from Henry's famous speech. There is a part that precedes that in which Henry talks about Tigers. Specifically he says "Then imitate the action of the tiger" You may be asking yourself why Shakespeare would have included this in this speech. Animal imagery has the ability to play on a human's primal instinct. If we were pretending the Henry was real in this instance, then this would have been used to create the desire to kill in his soldiers. He would have been trying to make them want to kill somebody. But in actuality, this was done by Shakespeare to create feelings of hatred towards the French. Shakespeare was not trying to make people hate the French! He was just trying to create feelings of animosity. He was stirring the pot. This is just one of the examples of when Shakespeare uses animal imagery to inspire his audience, however I believe that it is the most effective example. All-in-all this play is a great example of certain aspects of Shakespeare's writing style, his ability to tell a story, and his ability to influence a culture. Through his use of characterization, dialogue, and animal imagery, I believe that Shakespeare is able to effectively influence his audience, Thank you. ...read more.