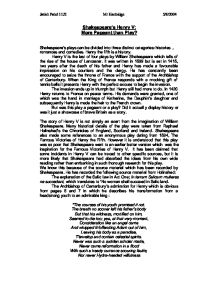 Shakespeare's Henry V: More Pageant than Play? Shakespeare's plays can be divided into three distinct categories: histories, romances and comedies. Henry the fifth is a history. Henry V is the last of four plays by William Shakespeare which tells of the rise of the house of Lancaster. It was written in 1599 but is set in 1415, two years after the death of his father and Henry has made a favourable impression on his courtiers and the clergy. He has constantly been encouraged to seize the throne of France with the support of the Archbishop of Canterbury. When the King of France responds with a mocking gift of tennis b***s it presents Henry with the perfect excuse to begin the invasion. The invasion ends up in triumph but Henry still had more to do. In 1420 Henry returns to France on peace terms. His demands were granted, one of which was the hand in marriage of Katherine, the Dauphin's daughter and subsequently Henry is made the heir to the French crown. But was this play a pageant or a play? Did it actually display history or was it just a showcase of brave Britain as a story. The story of Henry V is not simply an exert from the imagination of William Shakespeare. Many historical details of the play were taken from Raphael Holinshed's the Chronicles of England, Scotland and Ireland. Shakespeare also made some references to an anonymous play dating from 1594, The Famous Victories of Henry the Fifth. ...read more.

The action moves straight from Agincourt to Troyes, from 1415 to 1420. Henry woos Katherine in plain terms. Although all of these things were taken from the two sources it can be noted that the storyline of the play did not fully replicate the exact story of the Chronicles of England, Scotland and Ireland. Shakespeare had mad some changes. Here are a few of them: In Holinshed's Chronicles the Archbishop of Canterbury urges Henry to invade France simply to distract him from the issue of Church revenues but in the play the Archbishop of Canterbury supports Henry's claim to the French throne when he is asked for his opinion. In the Chronicles the tennis-ball incident was the main cause of the conflict whereas Shakespeare writes that the incident only brought the invasion closer. Holinshed writes that the conspirators plotted to kill Henry and his brothers and crown the childless Earl of March. Cambridge expected that he or his kin would succeed to the throne in due course whereas in the okay Cambridge, Scoop and Grey are in the pay of the French. They are, therefore, traitors to the country, reinforcing the audience's feeling of national pride. The Chronicles describe that Charles VI was a lunatic, and the Dauphin had full responsibility for running the country but in the play it is said that Charles is indecisive but he has not handed any of his responsibilities to anyone. In the Chronicles Henry supervised a soldier's execution for theft but in the play Henry approves of the hanging of Bardolf for theft. ...read more.

The final and most important reason for a history play was to contain a message for the political and church leaders so that they could learn from their previous mistakes. What many people do forget is that Henry V was not a play written for historians it was written for the lay people of Elizabethan London. People would come to the theatre to have a good time and it wasn't cheap; they paid a penny to get in which was a twelfth of a day's wages for a skilled workman. If you wanted a seat then you would have to pay another penny or two pence. The Elizabethan audiences were knowledgeable and enthusiastic and watching a play was an exciting experience. I think that they would have preferred the play to be performed in the way that Shakespeare had wrote to a more historic version because the historic version would have many negative things in it. This would have probably made the audience a bit more negative. The main reason that Shakespeare wrote it the way he did was that it would've made the audience feel positive and happier. It made them think that they were learning about the history of their country while at the same time having a good time. It would've also given them an escape from their dreary, laborious lives. To conclude, Shakespeare's Henry V is more pageant than play but for the right reasons. But we must ask ourselves, if Henry V only really displayed history would it not just be a documentary? Jatish Patel 11J2 Mr Hanbidge 5/8/2004 ...read more.