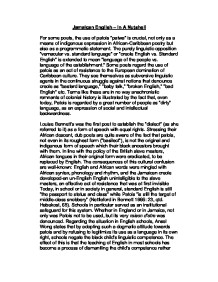 Jamaican English - In A Nutshell For some poets, the use of patois "patwa" is crucial, not only as a means of indigenous expression in African-Caribbean poetry but also as a programmatic statement. The purely linguistic opposition "vernacular vs. standard language" or "creole English vs. Standard English" is extended to mean "language of the people vs. language of the establishment." Some poets regard the use of patois as an act of resistance to the European domination of Caribbean culture. They see themselves as subversive linguistic agents in the continuous struggle against notions that denounce creole as "bastard language," "baby talk," "broken English," "bad English" etc. Terms like these are in no way anachronistic remnants of colonial history is illustrated by the fact that, even today, Patois is regarded by a great number of people as "dirty" language, as an expression of social and intellectual backwardness. Louise Bennett's was the first poet to establish the "dialect" (as she referred to it) as a form of speech with equal rights. ...read more.

Patois was the source material employed to form a new cultural perspective, a new understanding of the role of language ''as an edifice on which is constructed ';0 racial pride and power as well as a defence against the assimilationist t, encroachment of the dominant society" (Wong 1986: 113, qtd. Habekost, 66). The sound of patois was the power of the slum dwellers, the creative communicative means of the underprivileged and poor among whom Rastafari originated and flourished. And the Rastas even went one stage further. Seeking to "deconstruct what they see as the power structures of English grammar" (Ashcroft et al. 1989: --8, ibd. ), they reflected on the semantic implications of words or phonological segments of words to liberate the alien language from within. By dissecting, redefining or substituting these segments they categorized language into positive and negative forces in accordance with their world picture. The sounds of the words were taken as concrete signifiers reflecting this categorisation: Since the negative meaning of "oppression," for example, was felt to contradict the phonology of the prefix "op-" (up), which is seen as something positive, the verb "to oppress" was changed to "downpress." ...read more.

Among the second and third generations of Caribbean people living in Britain a distinctive form of British-Jamaican creole has developed which bears the mark of English vernacular speech and dialect elements ("Brummie," Cockney. ..). Dub poets, intending to achieve the widest possible scope of expression, write poems in standard English, too. The emphasis here is on "write." The dub poems in standard English are pieces that have not been composed for oral performance but designed for the page. When these pieces are read aloud, it is obvious that the rhythm is entirely different from that of most performance poems. It is a calm rhythm, hardly distinguishable from conventional forms of English poetry; only the Jamaican accent hints at the different origin of the piece and its author. This is seen as a natural effect by dub poetry pioneer Oku Onuora: Patois and reggae have the same riddim. It is the riddim of the people. If you want to put English lyrics to a reggae beat it doesn't work. So the riddim got to change. [Onuora 1986] ...read more.