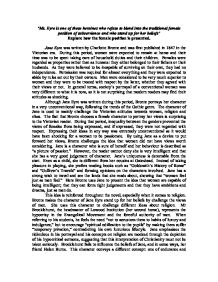 Jane Eyre: an unconventional heroine. Explore how the female position is presented

'Ms. Eyre is one of those heroines who refuse to blend into the traditional female position of subservience and who stand up for her beliefs' Explore how the female position is presented. Jane Eyre was written by Charlotte Bronte and was first published in 1847 in the Victorian era. During this period, women were expected to remain at home and their time was to be spent taking care of household duties and their children. Females were regarded as properties rather than as humans: they either belonged to their fathers or their husbands. As they were believed to be incapable of surviving on their own, they had no independence. Permission was required for almost everything and they were expected to abide by rules set out by their owners. Men were considered to be very much superior to women and they were to be treated with respect by the latter, whether they agreed with their views or not. In general terms, society's portrayal of a conventional woman was very different to what it is now, so it is not surprising that modern readers may find their attitudes as shocking. Although Jane Eyre was written during this period, Bronte portrays her character in a very unconventional way, following the trends of the Gothic genre. The character of Jane is used to mainly challenge the Victorian attitudes towards women, religion and class. ...read more.

The idea that woman are capable of being independent is established when she opposes Mr Rochester's efforts to "make the world acknowledge you a beauty" by pointing out that she will not be herself if he succeeds, "but an ape in a harlequin's jacket." Here Jane is refusing to be objectified and changed even by the man she loves. Bronte presents an independent woman who is sure of herself, and who wants to retain her individuality at any cost. Although Jane is a governess, she makes it clear that Mr Rochester doesn't "have a right to command" her and that she is equal to him in many ways. Also, Jane maintains her dignity by refusing to marry Mr Rochester. Bronte shows that women are capable of being respectable and that they are not always lead by their emotions. This causes Jane to take courage and leave Mr Rochester, disregarding the Victorian idea that women should do as men wish. While it could be argued that Jane surrenders to the Victorian expectations by returning to Mr Rochester, it is clear that she is not returning to him because she cannot survive on her own. Circumstances change, making Jane rich. She returns to Mr Rochester as an equal in every way (whereas previously she was aware of their social difference), and she returns for love more than anything else. ...read more.

By using the character of Jane Eyre, Bronte presents a woman who is capable of being intelligent, independent, dignified and confident about her opinions even though she is not very attractive or wealthy. She uses this character to challenge some of the Victorian concepts concerning women and their positions, as well as to convey her less major themes about religion and class. In some passages, Bronte addresses these issues directly (in the conversation about Mr Rochester and Jane being equals) while she uses more subtle methods in other situations (while describing Blanche). Bronte takes care not to make Jane a perfect person, but she incorporates flaws to allow readers to relate to her. She also uses other female characters to reinforce her points, by showing the qualities of some as well as showing the flaws in others. By doing so, Bronte shows that women can be equal to men, not only in intelligence, but in actions as well. She also portrays different types of women: some who give in to the expectations of society, and some who stand up for their own beliefs. She outlines what she thinks a woman's qualities should be and she encourages women to stand up their rights. Bronte successfully puts forward her points and she makes the reader understand her ideas by the portrayal of her characters, mainly females. ...read more.