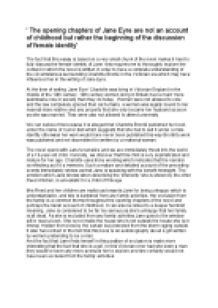 The opening chapters of Jane Eyre are not an account of childhood but rather the beginning of the discussion of the female identity. Discuss.

ï»¿' The opening chapters of Jane Eyre are not an account of childhood but rather the beginning of the discussion of female identity' The fact that this essay is based on a very small chunk of the novel makes it hard to fully discuss the female identity of Jane. this requires me to thoroughly explore the context in which the novel is written in order to have a complete understanding of the circumstances surrounding Charlotte Brontë in the Victorian era which may have influenced her in the writing of Jane Eyre. At the time of writing 'Jane Eyre' Charlotte was living in Victorian England in the middle of the 19th century. 19th century women living in Britain had a much more submissive role in society than they do today. Women were not allowed to vote and the law completely ignored then as humans. a woman was legally bound to her nearest male relative and any property that she only became her husband as soon as she was married. They were also not allowed to attend university. We can believe this because it is alleged that Charlotte Brontë published her book under the name of Currer Bell which suggests that she had to sell it under a male identity otherwise her work would have never been published this way Brontë's work was published and not discredited for written by a irrational woman. ...read more.

between the two sexes and uses our sympathy for this rebel as a way subtly gaining our support for her opposition to the injustices which Jane experiences. On page 2 of the noble we see how Jane relates to the images of rocks standing up alone in the sea of billow and spray and then broken out. She feels lost at sea and doesn't know what to do with her identity of being a woman in this era. Jane becomes very angry when John asked her to address him as his servant. she feels that she is as an equal to John if not superior due to his brutish behaviour and lack of intelligence. brontë cleverly creates a feeling of unjustness when John attacks her with 'his books'. It shows that even in this era Jane is attacked by her form of escapism. A book is conventionally used for educational purposes but in this instance it is used as a tool of violence to beat a women. It is clearly Johns fault but Jane is blamed as she is a women and thought to be irrational, mad and out of control. Therefore she is sent to the 'Red Room' ironically the direct opposite of her recent escapism from this cruel world. ...read more.

strictly told to stay on, which in itself is a momentous moment for this young girl and as she strolling across to room catches her reflection in the mirror. she realises that she has the power to change what is happening to her. she can act as a woman. It is ironic thought that Mrs Reed treats Jane so poorly considering her genre. We know that Mr Reeds dying wish was for her to look after Jane, but that is barely what she achieves. Here, I think that Brontë is addressing a bigger issue. She is suggesting that it is unto the Women act against these injustices. While we know that this is an account of Jane's childhood the terms and ideas that Brontë uses to describe it lays the foundation for what is surely to be the basis for the rest of the novel. The rebellious character of Jane will emerge. In conclusion it is very clear that Brontë has written a cleverly disguised opening chapter. For her to discuss the identity of women as a man but writing as a child deserves a lot of credit. Finally, by her planting the roots for ideas and conveying then in such a way that it encapptivates the reader and makes you feel sympathy for a women trying to discover her identity in this Victorian Era. ...read more.