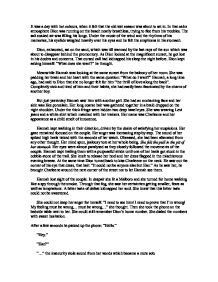 It was a day with hot colours, when it felt that the old wet season was about to set in. In that calm atmosphere Dion was running on the beach nearly breathless, trying to flee from his troubles. The salt soaked air was filling his lungs. Under the music of the wind and the rhythms of his memories, his eyelids weighed heavily over his eyes and he felt the emptiness in his stomach. Dion, exhausted, sat on the sand, which was till warmed by the last rays of the sun which was about to disappear behind the promontory. As Dion looked at the magnificent sunset, he got lost in his doubts and concerns. That cursed call had kidnapped his sleep the night before. Dion kept asking himself: "What does she want?" he thought. Meanwhile Hannah was looking at the same sunset from the balcony of her room. She was padding her brain and her heart with the same question: "What do I want?" Hannah, a long time ago, had said to Dion that she no longer felt for him "the thrill of love along the back". ...read more.

Hannah lost sight of the couple. In despair she lit a Malboro and she turned for home walking like a spy through the smoke. Through that fog, she saw her certainties getting smaller, fears as well as temptations. A bitter taste of defeat kidnapped her soul. She knew that this bitter taste could not be sweetened. She could not keep her anger for herself. "I need to see him! I need to prove that I'm wrong! My feeling must be wrong... must be wrong..." she thought. Then she took the phone on the bedside table next to her. She could still remember Dion's home number. She dialed the numbers with sweet hesitation. After a few seconds he picked up the phone: "Hello." "Hey." "Han?" "..." the insecurity stole sound from her words which became a mute sob. "Is it Hannah there?" "Yes it is Hannah! I need to see you, it is really important to me! Please... Pleeeease!" she said in one go. "Oo...Ok. When?" Dion answered confused. "As soon as you can!" "Tomorrow after dinner, nine p.m at mine? Is that alright for you?" ...read more.

Her sweet memories of him had lost the colours a long time ago; they were in black and white now. They had been neglected by space and time. She had already stored their days in boxes that were not supposed to be opened again. The "whys" in her mind were driving her crazy. Suddenly her doubtful thoughts were silenced. Dion tossed and turned in bed, rolling himself up in the warm linen. Still asleep he whispered: "Han... I love you". As she heard those words, she felt a thrill along her back, but she realized that it was not "the thrill of love". She fell in panic. Two bright drops glided along her cheeks, washing the rest of her make up off. "What have I done?" she thought. She had obtained what she wanted, but she felt no sense of carefree or ecstasy or love. She realized that her jealousy and her competitiveness played with Dion's emotions. She felt ashamed. She got off the bed, cautiously trying not to wake up that angel. She vanished forever like her love for him a long time ago. They will not share a night together, never again. ...read more.