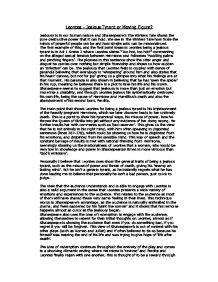 Leontes - Jealous Tyrant or Moving Figure? Jealousy is in our human nature and Shakespeare's The Winters Tale shows the pure destructive power that it can hold. We see in The Winters Tale how fickle the minds of powerful people can be and how simple acts can be misconstrued. The first example of this, and the first point towards Leontes being a jealous tyrant is in Act 1 Scene 2 where Leontes states "Too hot, too hot!" commenting on the alleged sexual tension between Hermione and Polixenes 'Paddling palms and pinching fingers'. The plosives in this sentence show the utter anger and disgust he carries over nothing but simple friendship and shows us how sudden an 'infection' can be. The jealousy that Leontes feels is coupled with sense of paranoia believing that everybody is 'whispering' around him and also states that his heart 'dances, but not for joy' giving us a glimpse into what his feelings are at that moment. ...read more.

This way of speech and the constant barrage of insults is met with rational thinking from Hermione, seemingly showing us the irrationalness of Leontes that a woman, who would be very low in knowledge and power in Shakespearian times is more virtuous than 'God's emissary'. Personally I believe that Leontes does show the general traits of being a jealous tyrant, such as the misuse of power and threat of death, giving his 'enemy an lasting wink'. But he isn't a generic tyrant, as he instantly regrets what he has done leading me to believe that personally he isn't a bad person, just quick to judge. The view that the audience understands and is able to engage with Leontes is also a valid argument in the sense that Leontes presents a wide variety of emotions and experiences to the audience. This relates to the audience as most of them will have shared these very same feeling in their lives. ...read more.