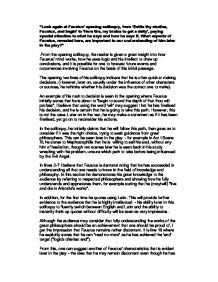 &quot;Look again at Faustus' opening soliloquy, from 'Settle thy studies, Faustus, and begin' to 'Here tire, my brains to get a deity'. What aspects of Faustus, revealed here, are important to our understanding of him later in the play?

"Look again at Faustus' opening soliloquy, from 'Settle thy studies, Faustus, and begin' to 'Here tire, my brains to get a deity', paying special attention to what he says and how he says it. What aspects of Faustus, revealed here, are important to our understanding of him later in the play?" .From the opening soliloquy, the reader is given a great insight into how Faustus' mind works, how he uses logic and his intellect to draw up conclusions, and it is possible for one to forecast future events and occurrences involving Faustus on the basis of this initial passage. The opening two lines of his soliloquy indicate that he is often quick at making decisions. (However, later on, usually under the influence of other characters or sources, he rethinks whether his decision was the correct one to make). An example of his rush to decision is seen in the opening where Faustus initially states that he is about to "begin to sound the depth of that thou wilt profess". I believe that using the word 'wilt' may suggest that he has finalised his decision, and he is certain that he is going to take this path. However, this is not the case. Later on in the text, he may make a statement as if it has been finalised, yet go on to reconsider his actions. In the soliloquy, he initially claims that he will follow this path, then goes on to consider if it was the right choice, trying to seek guidance from great philosophers. ...read more.

I find it very interesting how he says "Where is Justinian?" as if he is requesting for Justinian to come to him, when really when asking for Justinian he desires useful quotes, the source being his mind! His response to the Latin principle attributed to Justinian here may certainly surprise the audience. Previously, he had taken the philosophical and science-based quotes into consideration, and one can say that by doing this he is showing respect to the contributor. However, here he rubbishes Justinian's principle as "A petty case of paltry legacies!" I believe that from this, it seems as if Faustus is only taking the famous quotes and principles into consideration if he agrees with them and they provide evidence for his argument. I believe that by doing this, Faustus may not be effectively guided by the literature at all, as he is instantly dismissive of ideas he dislikes as opposed to taking them into some degree of consideration. This is a problem that I believe is evident at a number of points in the play where the Good and Evil Angel appear, for example in Act I Scene V. When Faustus is not sure what to do, he always appears dismissive of the Good Angel and on every occasion listens to the Evil Angel. However, this could be because it is the Evil Angel who always gets the last word, and is able to 'counterbalance' what the Good Angel said before Faustus is given much time to consider what the former said. ...read more.

Again, this provides further evidence for the theory that Faustus will not be content unless he is able to use his power to its full potential. One could forecast that either his plans may not go exactly as he desired, or if he is indeed successful then he will be severely punished. It is at this point that the audience will see the extent to which Faustus wishes to go - not only does he want the ability to raise the dead, but possibly to "raise the wind or rend the clouds" and be in control of the entire world. In the last lines he suggests that he wishes to have enough magic to be considered as a "demi-god" - this is a powerful term to use when nearing the end of the soliloquy as it may have shocked audience members, as it suggests that he is serious in becoming a dark magician. One may have realised (when the play was written) that because of this he is not considering the possible outcome of his wrongdoings. In general, the opening soliloquy is successful in showing that Faustus has great knowledge and wisdom, though some of his characteristics and his attitude may not be considered to all as highly favourable, and some character traits that are evident here are seen at other points in the play. Thus from the very start, Marlowe has successfully given the readers an accurate impression to what Faustus is like regarding his attitude and character. ...read more.