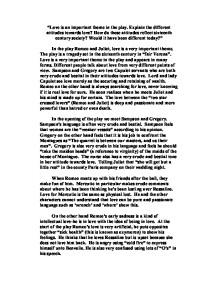 Love is an important theme in the play. Explain the different attitudes towards love? How do these attitudes reflect sixteenth century society? Would it have been different today?&quot;

"Love is an important theme in the play. Explain the different attitudes towards love? How do these attitudes reflect sixteenth century society? Would it have been different today?" In the play Romeo and Juliet, love is a very important theme. The play is a tragedy set in the sixteenth century in "fair Verona". Love is a very important theme in the play and appears in many forms. Different people talk about love from very different points of view. Sampson and Gregory are two Capulet servants who are both very crude and bestial in their attitudes towards love. Lord and lady Capulet see love merely as the securing and retaining of wealth. Romeo on the other hand is always searching for love, never knowing if it is real love for sure. He soon realises when he meets Juliet and his mind is made up for certain. The love between the "two star crossed lovers" (Romeo and Juliet) is deep and passionate and more powerful than hatred or even death. In the opening of the play we meet Sampson and Gregory. ...read more.

In the sixteenth century, when the play was written, rich people like the Capulet's or Montague's didn't get married for love. His or her parents arranged a marriage with someone rich or powerful. It was a business deal - a new way of getting more money or power into the family. Lord Capulet is very protective over his daughter Juliet. At this time Lord Capulet is in complete control. When Paris asks him if he can marry his daughter his initial reaction is to "Let two summers wither in their pride, ere we may think her ripe to be a bride". When asked again he says, "that if she agreed, within her scope of choice. Lies my consent and fair according voice". When Juliet refuses to marry lord Capulet sees only Juliet's ingratitude after all the effort he has put into finding a good match. Lord Capulet is absolutely furious. He calls her "mistress minion" (spoilt brat), to "You baggage! You tallow-face!". He also threatens her saying "my fingers itch" meaning that if he could hit her he would. ...read more.

Romeo uses another reference to light "for here lies Juliet, and her beauty makes this vault of feasting presence full of light". Romeo's final speech is very beautiful "death that hath sucked the honey of thy breath had no power yet upon thy beauty". He is pledging himself to her forever- in death. Juliet's final words echo this "friendly drop" (poison) death her friend, as it will reunite her. Nowadays the play would have been very different. Mainly because Paris would not be marrying Juliet after meting her only once and arranging the marriage with her father not her. Also it would be very unlikely that Romeo and Juliet would be getting married after knowing each other for less than a week. These are just two of the many factors, which if the play had been set today would be very different if the play was set nowadays. In the play love has proved stronger than hatred, even stronger than death. Love is even stronger than the power of fate. It has taught society a lesson. The death of Romeo and Juliet has brought hope foe the future of "fair Verona". By Charles Giblin ...read more.