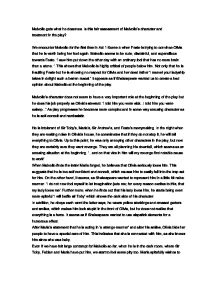 Malvolio gets what he deserves. Is this fair assessment of Malvolio(TM)s character and treatment in the play?

Malvolio gets what he deserves. Is this fair assessment of Malvolio's character and treatment in the play? We encounter Malvolio for the first time in Act 1 Scene 5 when Feste is trying to convince Olivia that he is worth being her fool again. Malvolio seems to be rude, disdainful, and supercilious towards Feste. 'I saw him put down the other day with an ordinary fool that has no more brain than a stone. '. This shows that Malvolio is highly critical of people below him. Not only that he is insulting Feste but he is showing no respect for Olivia and her dead father 'I marvel your ladyship takes in delight such a barren rascal.' It appears as if Shakespeare wanted us to create a bad opinion about Malvolio at the beginning of the play. Malvolio's character does not seem to have a very important role at the beginning of the play but he does his job properly as Olivia's steward. ...read more.

'I do not now fool myself to let imagination jade me; for every reason excites to this, that my lady loves me'. Further more, when he finds out that his lady loves him, he starts being even more spiteful 'I will baffle sir Toby' which shows the dark side of his character. In addition, he obeys each word the letter says, he wears yellow stockings and crossed garters and smiles, which makes him look stupid in the front of Olivia, but he does not realize that everything is a farce. It seems as if Shakespeare wanted to use slapstick elements for a humorous effect. After Maria's statement that he is acting in 'a strange manner' and after his smiles, Olivia bids her people to have a special care of him. This indicates that she is connected with him, as she knows him since she was baby. Even if we have felt large contempt for Malvolio so far, when he is in the dark room, where Sir Toby, Fabian and Maria have put him, we start to feel some pity too. ...read more.

Finally, when he appears on the celebration, he arouses our sympathy rather that derision, as he asks why he has been made 'the most notoriously geck and gill, That e'er invention played on?'. Olivia recognizes 'Maria's hand' and explains why she taught he was mad. This reveals the whole akt. Fabian admits his fault and says that 'stubborn and uncourteous' Malvolio deserves what he gets. Feste confesses that he is participant as well and explains why he did it 'But do you remember - 'Madam, why laugh you at such a barren rascal, and you smile not, he's gagged?' '. The culmination is Malvolio's last sentence 'I'll be revenged on the whole pack of you!' where he reveals his personality. He cannot forgive, but thinks only of revenge. This end sums up our ambivalence towards the whole of this deception. It appears that Shakespeare wanted us to agree with Fabian's view on the whole thing despite the fact that at a certain moments Malvolio is amusing and victim. ...read more.