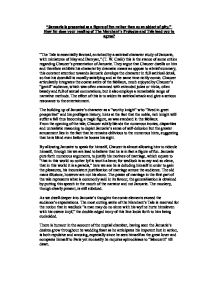 The Merchant(TM)s Prologue and Tale

"Januarie is presented as a figure of fun rather than as an object of pity." How far does your reading of The Merchant's Prologue and Tale lead you to agree? "The Tale is essentially farcical, enriched by a satirical character study of Januarie, with miniatures of May and Damyan," (T. W. Craik) this is the stance of some critics regarding Chaucer's presentation of Januarie. They argue that Chaucer dwells on him and therefore exhibits his character by dramatic means as oppose to a brief summary, this constant attention towards Januarie develops the character in full satirical detail, so that his downfall is morally satisfying and at the same time richly comic. Chaucer articulately integrates the coarse satire of the fabliaux, much enjoyed by Chaucer's "gentil" audience, which was often crammed with extended jokes or tricks, often bawdy and full of s****l connotations, but it also employs a remarkable range of narrative methods. The effect of this is to widen its satirical attack and give a serious resonance to the entertainment. The building up of Januaire's character as a "worthy knight" who "lived in greet prosperitee" and his profligate history, hints at ...read more.

The mockery, though clearly present, is still subdued. As we dwell deeper into Januarie's thoughts the comic elements exceed the audience's expectations. The most cutting satire of the Merchant's Tale is reserved for the notion that in wedlock "a man may do no sinne with his wyf ne hurte himsleven with his owene knyf," the double-edged irony of this line looks forth to him being cuckolded. There is humour in the account of the nuptial chamber, having seen the Januarie's desires grow throughout he wedding feast as he anticipates his impotent l**t in action, is both repulsive and amusing, especially since he sees himself as the great lover and compares himself to Paris yet ironically he requires aphrodisiacs to "laboureth" till dawn. The happiness of Januarie at this point prepares us for his misfortunes later. The introduction of the garden as his special preserve for love, used in the summer for his s****l activity. Irony returns when Januarie seems to express genuine love for his wife, the passage is a parody of the Song of Solomon, and is the most beautiful and poetic lines within the tale, with references being made to the voice of a turtledove and "columbine." ...read more.

He is to embrace the tree, whilst she climbs on his back. She is treading on him physically and metaphorically into Damyan's arms, this is visually very strong as it is a sign of dominance or even victory. No matter how coarse and perverted Januarie's character has seemed, at this point inevitably, the audience are sympathetic towards the cuckolded husband. As a farce this is perfect, but once Januaire's sight has been restored May once again confidently answers him, which seems to satisfy Januarie. the credulous Januarie is left, full of the joys of prospective fatherhood, now a distinct possibility thanks to Damyan, and he is now as much the victim of his illusions as he was at the beginning. Januarie's character is amusing in itself and offers Chaucer opportunities of showing it off, putting the reader in good humour as well as giving the necessary facts. The Merchant's tale picks up strands from the previous tales. It continues the theme of war between the sexes but the merchants stance sides with neither, his tale backs neither the husband nor the wife but shows each abusing the other for his or her pleasure rejecting the idealistic concept of love in marriage. ?? ?? ?? ?? ...read more.