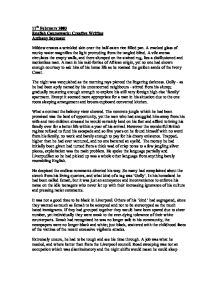 11th February 2003 English Coursework: Creative Writing Anthony Seymour Mildew creates a wrinkled skin over the half-eaten rice filled pan. A cracked glass of murky water magnifies the light protruding from the tangled blind. A vile aroma circulates the empty walls, and there slumped on the stained rug, lies a disillusioned and motionless man. A man in his mid-forties of African origin, yet no one had shown enough courtesy to ask him of his home life as he roamed the golden sands of the Ivory Coast. The night was vanquished as the morning rays pierced the lingering darkness. Golly - as he had been aptly named by his unconcerned neighbours - stirred from his slump; gradually mustering enough strength to explore his still very foreign high-rise 'family' apartment. Except it seemed more appropriate for a man in his situation due to the one room sleeping arrangement and broom cupboard converted kitchen. What a contrast the balcony view showed. ...read more.

Ikmah had recognized he was no longer safe in his community, the newspapers were no longer black and white; just black, scattered with the childhood faces of the victims of the recent excessive vigilante attacks. Extremely unsure, he had to be tough and see his time through. A job was what he needed, and where better than from the Liverpool council. Road sweeping was not an occupation which was discriminatory and the night shifts would mean he could sleep during the day which he regarded the most tormenting and intimidating time. And so Ikmah was accepted for the long hours, poorly paid job, which no self-respecting white male would have considered applying for, but pride was not important and he was a robust figure, so it was on these grounds that Liverpool council felt they were very fortunate. Ikmah was good at his job and worked long hours, saving every last copper for the safe shipment of his children who he knew would barely recognize him now. ...read more.

He had never imagined dying this way. What an awful recent life he had left, no accomplishments. All he desired was to be back home. He had worked so hard for so little and as he fought in the freezing conditions it was a steel capped boot to the face which was to end it all. He lay motionless in his cobbled grave with his life seeping away, watched over by his armed 'funeral directors' dressed head to toe in black. Another death unsolved by the constabulary. But who would miss him, his family had no idea of his whereabouts and so his body wound up - like so many to meet the same fate - in the Mersey. And as his neighbours learnt of his untimely demise and his priceless burial on behalf of the youths that had thoughtfully ended his eternal agony, there was little to reflect upon except perhaps Ikmah's apartment could be finally cleared for the arrival of another young African man in the same precarious predicament, who was sure to land on his feet and afford the safe passage of his family, within the year. ...read more.