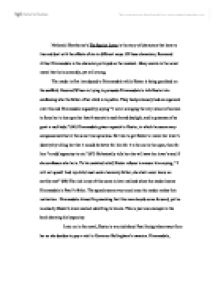 Nathaniel Hawthorne's The Scarlet Letter is the story of characters that have to live and deal with the effects of sin in different ways. Of these characters, Reverend Arthur Dimmesdale is the character portrayed as the weakest. Many events in the novel reveal that he is cowardly, yet still strong. The reader is first introduced to Dimmesdale while Hester is being punished on the scaffold. Revered Wilson is trying to persuade Dimmesdale to talk Hester into confessing who the father of her child is in public. They had previously had an argument over this and Dimmesdale argued by saying "it were wronging the very nature of woman to force her to lay open her heart's secrets in such broad daylight, and in presence of so great a multitude." (66) Dimmesdale gives a speech to Hester, in which he seems very compassionate but at the same time spineless. He tries to get Hester to reveal her lover's identity by telling her that it would be better for him for it to be out in the open, then for him "to add hypocrisy to sin." (67) He basically tells her she will save her lover's soul if she confesses who he is. ...read more.

(139) Dimmesdale replies by saying "I do verily believe it... Methinks, it must needs be better for the sufferer to be free to show his pain, as this poor woman Hester is, than to cover it all up in his heart." (139) Dimmesdale is saying this from personal experience since he himself has to cover up his sin. Instead of feeling shame, he feels guilt, which he considers to be worse. Chillingworth begins to be suspicious of Dimmesdale after this and even tells him that he thinks his spiritual health is causing the deterioration of his health. Dimmesdale becomes angry and gets out of the conversation making Chillingworth even more suspicious. A few days later, Chillingworth sneaks up to Dimmesdale while he is sleeping and lifts aside his shirt. The reader does not know what Chillingworth saw, but whatever it was, it made him rejoice. Dimmesdale continues to suffer, but this suffering causes him to deliver some very powerful sermons. His suffering allows him to relate to human weaknesses. He wants to confess so badly, yet he doesn't: "I, whom you behold in these black garments of the priesthood, -I, who ascend the sacred desk, and turn my pale face heavenward, taking upon myself to hold communion, in your behalf, with the Most High Omniscience, -I, in ...read more.

He is so inspired he goes home and throws away his old sermon he wrote for Election Day and writes a newer and better one. After he gives his sermon on Election Day, Dimmesdale mounts the scaffold with Hester and Pearl. He says, "In the name of Him, so terrible and so merciful, who gives me grace, at this last moment, to do what- for my own heavy sin and miserable agony-I withheld myself from doing seven years ago, come hither now, and twin they strength about me!" (265) The crowd is in complete shock. As he continues his confession, he starts getting weaker and weaker and Hester for support. Even though this whole thing is taking place in front of the whole town, none of the Puritans have any control over the situation. Dimmesdale acts as his own prosecutor and his punishment is the loss of his life. Dimmesdale is the character in "The Scarlet Letter" who has the biggest burden on him. He goes through seven, long years of holding in his guilt and sin, which would take a very strong person. Even though he is cowardly and hypocritical, he also has good qualities such as being strong and compassionate. He obviously knows how to touch people on a personal level, especially after they realized that even a seemingly pious person, like himself, sins. 2 Supenski ...read more.