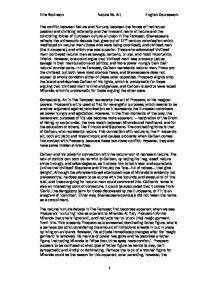 Nature vs. Art in The Tempest

The conflict between Nature and Nurture, between the forces of instinctual passion and civilising rationality and the innocent realm of nature and the controlling forces of European culture all clash in The Tempest. Shakespeare reflects the philosophic debate that grew out of 17th century colonisation which meditated on natural man (those who were being colonised), and civilised man (the Europeans), and which one was superior. Those who advocated 'civilised man' portrayed natural man as savage, barbaric, brutal, and most importantly, inferior. However, one could argue that 'civilised man' was probably just as savage in their manipulation and politics, and more power-hungry than their natural counterparts. In the Tempest, Caliban represents natural man, Prospero the civilised, but both have most obvious flaws, and Shakespeare does not appear to wholly condemn either of these polar opposites. Prospero alights onto the island and deprives Caliban of his rights, which is problematic for those arguing that 'civilised man' is kind and genteel, and Caliban is said to have raped Miranda, which is problematic for those arguing the other case. Contextually, Art in The Tempest represents the art of Prospero, or his magical powers. Prospero's art is used at first for revengeful purposes, which seems to be another argument against colonisation as it represents the European colonisers as power hungry and egotistical. However, in the final moments of the play, the benevolent purposes of it's use become more apparent - restoration of the Chain of Being, or social order, the love match between Miranda and Ferdinand, and for the education of others, like Trinculo and Stephano. ...read more.

His childish innocence in calling the sun the 'bigger light' adds to this sympathy. This speech, from line 333, also has a stoical, poignant feel, which presents Caliban as quite noble. This leads to a vague almost respect for Caliban. During this presentation of Caliban, the audience is forced to come to a decision. Caliban, for all his faults, does not attempt to cage and contain anyone on the island. He has an innate appreciation of 'liberty' and all that it implies. It is perhaps easier for a modern reader to see Caliban's nature as more beneficial than Prospero's attempts to harness it. However, an audience of Shakespeare's era would disregard Caliban's good points, or perhaps see them as a faint imprint of Prospero's benevolence in his education of Caliban. The attempted rape of Miranda is the most obvious negative point of Caliban, and is explicit evidence of Caliban's apparent lack of soul. Shakespare seems to have skirted over the obvious point that 'civilised' Europeans also commit sexual crimes. However, Antonio also claims to have no conscience in the play, which is more shocking because as a civilised man, we expect him to be continually virtuous and eloquent. Prospero has elements of both the evil and the benevolent. At the beginning of the play, we see him as a very commanding and unrelenting ruler. As the 'right duke of Milan', he, upon alighting the island, has assumed all power. ...read more.

When Prospero's 'charms are all o'erthrown', he acknowledges Caliban is not evil, but his ill nature and behaviour is due to his parentage. However, Antonio, Prospero's brother, is 'forgiven' for the past, but is still not recognised as an equal by Prospero. He is portrayed as power-hungry and foolish throughout, and this 'civilised' man is altogether more corrupt than Caliban and his nature. To conclude this evaluation of Shakespeare's portrayal of Nature and Art in The Tempest, it is evident that Shakespeare does not feel wholly satisfied with either the 'civilised' European etiquette, or the 'un-civilised' ways of Caliban, but merely hopes to show the differences and parallels between the two. However, Shakespeare also uses the finale of the play to illustrate the redeeming features of using Art, and civilisation, to fix the problems as the storyline progressed. As Shakespeare was himself a colonising European, it is understandable that he should portray civilisation, and Prospero, as slightly more favourably than Caliban's raw and untamed nature. However, it is perhaps unfair to compare Caliban and Prospero as Nature and Nurture, as Caliban is never acknowledged to be human. This means that Caliban's nature, although at times brutal and animalistic, is excusable because he is an animal or monster. However, the civilised Europeans who have similar amounts of evil in them are more surprising, especially when considering a writer in Shakespeare's era should be doing all he can to advertise colonialism. Ellie Robinson Nature Vs. Art English Coursework 1 ...read more.

This essay starts well and makes several interesting observations in the argument that follows. The main problem is structural - this could have been a briefer and more focused essay with a more effective structure. As it is, it becomes more like a list of points rather than a considered argument.