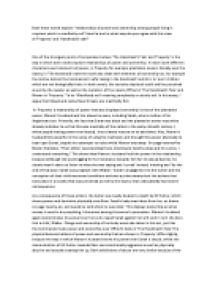 One of the strongest points of comparison between 'The Handmaid's Tale' and 'Property' is the way in which both novels explore relationships of power and ownership.

﻿Both these novels explore "relationships of power and ownership among people living in a system which is manifestly evil" How far and in what ways do you agree with this view of 'Property' and 'Handmaid's tale'? One of the strongest points of comparison beteen 'The Handmaid's Tale' and 'Property' is the way in which both novels explore relationships of power and ownership. In each novel different characters exert elements of power, in Property for example plantation owners literally own the slaves; in 'The handmaid's tale the novel also deals with elements of ownership too, for example the motive behind the Commander's wife taking in the handmaid's which is to 'own' children which are not biologically theirs. In both novels, the societies depicted could well be perceived as evil by the reader, as well as the narrators of the novels; Offred in 'The Handmaid's Tale' and Manon in 'Property'. To be "Manifestly evil' meaning completely or utterly evil. In this essay, I argue that Gilead and native New Orleans are manifestly Evil. In 'Property' a relationship of power that also displayed ownership is that of the plantation owner, Manon's husband and the slaves he owns, including Sarah, who is mother of his illegitimate son. Primarily, the fact that Sarah was black and the plantation owner was white already indicates to us that this was mentality of the nation in the early ninteeth century ( white people having power over blacks), since slavery was yet to be abolished. ...read more.

This shows that Serena Joy couldn't bear to have Offred around her if it didn't physically involve the ceremony, as Offred had the power to have children, whilst she had been stripped of it, and this situation was a constant reminder physically, mentally and emotionally. This also shows that Serena Joy is reasserting her power over Offred following the ceremony where she felt utterly powerless, which is another feminist interpretation. Serena Joy exerts her power over Offred because of the position the patriarchal society places her in. Likewise, Sarah, the servant, has power over Manon. Apart from the fact that Manon's husband was the father of Sarah's child, Manon's husband was the one who desired Sarah as opposed to Manon; Sarah gave him children as well and he wanted her. Sarah was not supposed to be in that position in Manon's matrimonial home, and they both shared bedrooms, which brought about more tension and symbolism that they were almost on the same level in rank . On page 14 Manon describes " her wide eyes watching me, and I thought , she has been watching me like that this entire night". This exhibits boldness , as staring at someone shows they're not afraid or they have more power, so Martin was successful in exploring that type of relationship in 'Property'. In 'The Handmaid's Tale', as discussed above, the Commander has power over the handmaid, so also in a peculiar way does the handmaid herself have a relative level of power over the commander in their relationship, although a patriarchial society. ...read more.

Again, there is no evidence in the book that suggests Manon's husband used this tactic to have a child with Sarah. But one thing was certain; slaves had no rights and owned nothing. Both 'Property' and 'The Handmaid's Tale' provide evidence of the exploration of the relationship of ownership as well as power. Both time periods these novels were set in; (one being in the foreseen future and a dystopian setting and the other being in the past) are perceived in our present day as utterly evil; this added to the evidence given to us and extended the explorations automatically. I also feel that Gilead and native New Orleans are manifestly evil, because Offred felt detatched from her surroundings and could not be free to express her real and true feelings. Similarly, the slaves and servants were very restricted and were treated as objects rather than people. The decisions that were decreed in the two different societies were similar in the sense that there was a real lack of a democracy system available to everyone. These novels explore these two major relationships to a great degree and it is very evident in both novels because most of these relationships were present throughout the entire novel, and the narrators (Offred and Manon) didn't hesitate to describe them from their own points of view. Although both narrations may be biased, from the interpretations of what actually happened (according to them) that we are given, the strong conclusion can be made that they both successfully explore both relationships in an utterly evil environment being lived in to a far extent. ...read more.