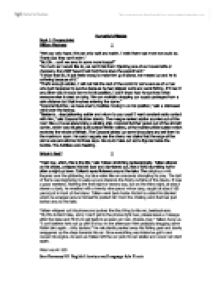 Opening Of A Novel- Humanity's Mistake

Humanity's Mistake Book 1: Encapsulated Military Madness 1 "He's our only hope. We can only wait and watch. I wish there was more we could do. Thank God they can't swim." "But Sir... can't we send in some more troops?" "As much as I would like to, we can't risk them hijacking one of our hovercrafts or choppers, the UNSF haven't set foot there since the experiment." "I know that Sir, it just feels wrong to make him go it alone, we messed up and he is suffering because of it." "That's enough soldier, I will not risk the rest of the world for some excuse of a man who just happened to survive because he had skipped work and went fishing. If I had it any other way it would be me in his position. I don't know how he survived when everyone else is dead or dying. We can maintain dropping our supply packages from a safe distance but that involves entering the dome." "Corporal Butcher, we have enemy hostiles moving in on his position," said a distressed voice over the tannoy. "Bastards... stop jabbering soldier and return to your post! I want constant radio contact with him," said Corporal Butcher sternly. The meagre ranked soldier scurried out of the room like a mouse abandoning a sinking ship. Corporal Butcher gazed out of the aircraft carrier, which was situated just outside British waters, at the indestructible bubble which encircled the whole of Britain. ...read more.

...Thud! ... Thud! ...The Arklikes were pummeling the dome like a battering ram on the gates of a castle. They resembled humans in everyway apart from their glistening white eyes, which contained no pupils, and their singed hair that looked like they had had a fight with a flamethrower. Their eyes flickered to each other. A groan echoed throughout the area. They turned to their master. A few of the bigger Arklikes seemed to gaze at their master for eternity and then slowly retreated from the dome, back to where the experiment happened. The Master slowly walked among his followers as they plugged themselves in to recharge, ready for this evening's hunt. Only the Master's most trusted kin sauntered with him. "We have succeeded in eliminating all forms of transport Master rendering the black eyes useless." The Master nodded and turned to another Arklike. "There are a few pockets of resistance left but we expect all remaining black eyes dead by the morning." "That is good news. After that we can concentrate on the bubble. Return to your charging stations, we need you to be at least ninety percent strength by the night." "Yes Master," they both burbled in unison. They hurried away to their own charging stations and plugged themselves in. The Master gazed out of a nearby, blood smeared window, before retiring into the shadow. Angler's Assignment 4 Talkan clambered out of the car. ...read more.

"Really? That is very interesting... We had suspicions they had been replenishing their powers. They weren't meant to stay alive this long. We hadn't foreseen this in the experiment." "What do you mean, they weren't meant to stay alive this long? What experiment?" "Never mind son, I'll get my best boys to look at how they are replenishing their power and I'll get back to you." "Okay Sir, what should I do now?" "Well, we have dropped some supplies fifteen miles east of your position, your best bet would be to head there. There's plenty of food, water and weapons located there. You shouldn't encounter any Arklikes because our intelligence tells us that they very rarely come out in the day. However, they do send out regular patrols of the surrounding area so be on your guard. Also they have eliminated all forms of transport so you better be fit boy." "Yes Sir. What should I do once I've got there?" "Full of questions aren't you boy? You will wait for a phone call from us." "Okay Sir." "Well get going then, if it gets dark try and find some shelter and lay low for the night. That's the only advice I can give you. Good luck." The Corporal hung up. Talkan stood in awe. A few days ago he had taken a few days off work to have a nice little fish. How things change. Now he could be the only man left in Britain. Word count: 1470 Sam Hennessy 811 English Literature and Language Julia Firmin ...read more.