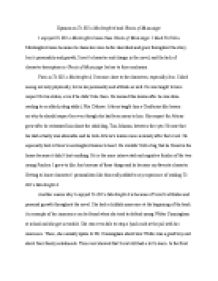 Opinion on To Kill a Mockingbird and Ghosts of Mississippi

Another reason why I enjoyed To Kill a Mockingbird is because of Scout?s attitudes and personal growth throughout the novel. She had a childish innocence at the beginning of the book. An example of her innocence can be found when she tried to defend young Walter Cunningham at school and she got in trouble. She was even able to stop a lynch mob at the jail with her innocence. There, she casually spoke to Mr. Cunningham about how Walter was a good boy and about their family entailments. This event showed that Scout still had a lot to learn. In the front pages, Scout got into fights with Walter and her cousin Francis because of disagreements. ...read more.

This is also true when his son got in a fight because of the trial. Here they were going for an Atticus-like teaching moment. I would have liked to know more about Bobby Delaughter?s first wife to know if she was always so mean and r****t. I wish I could have known the kids? thought on the divorce. In the end, I liked To Kill a Mockingbird more than Ghosts of Mississippi. Character personalities and development played a big part in my opinion. Harper Lee just did a great job of describing Jem and Scout. I really got into the book this way. I couldn?t say that I connected with the characters in Ghosts of Mississippi. Jem and Scout played great roles in the book and To Kill a Mockingbird turned out great for a mandatory read. ...read more.