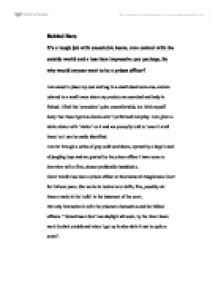 Original Writing - Prose: Behind Bars - It's a tough job with unsociable hours, rare contact with the outside world and a less than impressive pay package. So why would anyone want to be a prison officer?

Behind Bars It's a tough job with unsociable hours, rare contact with the outside world and a less than impressive pay package. So why would anyone want to be a prison officer? I am asked to place my coat and bag in a small cloakroom area, and am ushered to a small room where my pockets are searched and body is frisked. I find this 'procedure' quite uncomfortable, but think myself lucky that these rigorous checks aren't performed everyday. I am given a white sticker with 'visitor' on it and am promptly told to 'wear it at all times' so I can be easily identified. I am let through a series of grey cold steel doors, opened by a large bunch of jangling keys and am greeted by the prison officer I have come to interview with a firm, almost predictable handshake. Carol Tomlin has been a prison officer at Bournemouth Magistrates Court for thirteen years. She works in twelve hour shifts, five, possibly six times a week in the 'cells' in the basement of the court. ...read more.

I ask Carol if she knows what all the prisoners are on trial for, and whether this affects how she acts with them. "I do know what all of the prisoners are on trial for, and sometimes it can be hard remaining impartial, but you have to. You see the difference with working in a court prison to a normal one, is that most of the people we see haven't been tried yet, so we don't really know whether they are guilty, or as innocent as you and me. "Last week we had a man of about fifty in here. He was well spoken, immaculately turned out, and looked like he came from a fairly 'well off' background. It was hard trying to talk to him though as he was on trial for r**e of a minor. When kids are involved in something like that I tend just to detach myself from the situation, but sometimes it does really play on your mind". Carol has two children, a girl of fourteen and a boy who has just turned seventeen. ...read more.

"It's a requirement that we keep ourselves fit and healthy. When I began my training to become a prison officer I had to learn self-defence and restraining manoeuvres, obviously encase someone tried to escape whilst in my custody". Being a tall well-built woman, I find it hard to believe that anyone could escape from Carol. However, she assures me that there is a lot who try. "It's because I'm a woman that people think I'll be a soft touch and try their luck. I've had my arm broken and ribs badly bruised when a man tried to escape before. But it is part and parcel of the job and you just deal with it". I ask Carol what one aspect about her job would she change if she could. She ponders for a while, looks at her brightly painted red nails, then at the cold, dull cells that surround her "all that I would change is the decoration in here, it needs some colour and life, so everyone feels more at home". If the prison doesn't get the lick of paint it needs, then I am sure that Carol will brighten up the cold surroundings. Words: 1007 ...read more.