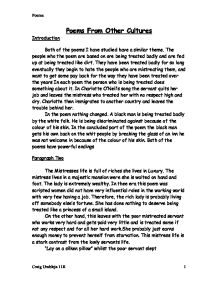 Poems From Other Cultures

Poems From Other Cultures Introduction Both of the poems I have studied have a similar theme. The people who the poem are based on are being treated badly and are fed up at being treated like dirt. They have been treated badly for so long eventually they begin to hate the people who are mistreating them, and want to get some pay back for the way they have been treated over the years In each poem the person who is being treated does something about it. In Charlotte O'Neil's song the servant quits her job and leaves the mistress who treated her with no respect high and dry. Charlotte then immigrates to another country and leaves the trouble behind her. In the poem nothing changed. A black man is being treated badly by the white folk. He is being discriminated against because of the colour of his skin. In the concluded part of the poem the black man gets his own back on the whit people by breaking the glass of an inn he was not welcome in because of the colour of his skin. Both of the poems have powerful endings Paragraph Two The Mistresses life is full of riches she lives in Luxury. ...read more.

Paragraph Four The poets attitude towards the life of the servant is negative. She writes about how the servant was treated badly where the employers did not feel any responsibility to the well being of one of their hardest working servants. "I scrubbed till my hands were raw" the poet is trying to put an image into the reader's minds. The writer creates the image of a poor servant working her guts out for people who do not even care about her. The author is showing that the mistress reaped the benefits of the servants hard work witch eventually caused her so much pain that she could not work. The mistress had a clean polished parquet floor the servant had discomfort. The mistress just lives off other people's hard work. At the end of the story the author increased the beat played this shows that the servant is getting angry. She also repeats words "I've cleaned" three times this also adds to the beat. The author uses "I" and "You" with great affect. "I" represents the servant and "You" the mistress. This shows you a strong differences in the role these two women play, it shows there differences in class. ...read more.

The last sentence is a very powerful conclusion to the poem, "Nothings Changed" The writer is emphasising the fact that after the Government thought they had sorted out the relations between whites and blacks in Africa. They have not and nothing changed black people are still being treated like dirt. Conclusion The two poems show how people are being treated like animals and walked over by other human beings. The poems also show how people rise up against wrong doings and fight for there rights even though all the odds are stacked against them. In each poem both of the people are fighting for there civil wrights. Both poems have very powerful endings however the endings are very different. In Charlotte O'Neil's Poem the servant lives the hard ship behind and moves onto a better life "And you can open your own front door" In this last sentence the writer is saying there is hope if you work for it and stand up for yourself, regardless of the class difference. How ever at the end of the nothings changed poem. The writer shows that the black person will have to live on in this unjust world and there is no escape for him, no matter what he does nothing will changes. Poems 1 Craig Umbleja 11R ...read more.