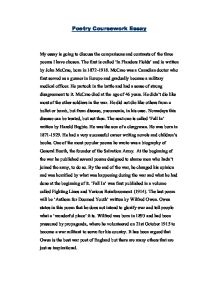 Poetry Coursework Essay My essay is going to discuss the comparisons and contrasts of the three poems I have chosen. The first is called 'In Flanders Fields' and is written by John McCrae, born in 1872-1918. McCrae was a Canadian doctor who first served as a gunner in Europe and gradually became a military medical officer. He partook in the battle and had a sense of strong disagreement to it. McCrae died at the age of 46 years. He didn't die like most of the other soldiers in the war. He did not die like others from a bullet or bomb, but from disease, pneumonia, in his case. Nowadays this disease can be treated, but not then. The next one is called 'Fall In' written by Harold Begbie. He was the son of a clergyman. He was born in 1871-1929. He had a very successful career writing novels and children's books. One of the most popular poems he wrote was a biography of General Booth, the founder of the Salvation Army. At the beginning of the war he published several poems designed to shame men who hadn't joined the army, to do so. By the end of the war, he changed his opinion and was horrified by what was happening during the war and what he had done at the beginning of it. 'Fall In' was first published in a volume called Fighting Lines and Various Reinforcement (1914). ...read more.

McCrae also repeats, 'loved and were loved' which shows that the soldiers are and were loved and greatly missed still today. He is trying to gain the readers sympathy for what the soldiers had to go through. For the first stanza of this poem the rhyming scheme is A A B B A. For the 2nd stanza it is A A B C and for the 3rd stanza it is A A B B A C. The beginning of the second stanza he uses a very powerful phrase to gain the readers attention, 'we are dead'. This creates an impact, how it wasn't very long ago when soldiers fighting for Brittan lost their lives. The mood of the first stanza is over-romantic. It introduces the soldiers and how they are remembered in a calm place. The second stanza (4 lines long) is also quite slushy and talks about how the soldiers are loved and remembered. As it gets to the third stanza (6 lines long) the mood changes into a more grim and persuasive manor, asking people to join the war and carry on fighting for the soldiers that couldn't, 'The torch; be yours to hold it high. If ye break faith with us who die'. This also persuades others to take up the defence force course and fight for the freedom they deserve so that the soldiers can rest in harmony. ...read more.

At the end of the poem it shows a dramatic ending showing the 'drawing-down of blinds'. Showing that these poor innocent lives have to come to an end, and it is your fault that they have killed the new generation that had lots of prospective. Two of the poems are against war ('Anthem for Doomed Youth' and 'In Flanders Fields'), showing the reality behind it and the sheer cruelty and suffering of innocent young men. The other ('Fall In'), is a letter persuading men to enlist for the war, sugar coating it to make it seem like its heaven, they only realise that it's sour and bitter in the middle till they live in the trenches day to day. In 'Anthem for Doomed Youth' I agree with the points being made but I am not so keen on the way he expresses his views, I think it's a bit aggressive and a little over the top. In 'In Flanders Fields' I agree very much because its making its point in a rather less aggressive way to 'Anthem for Doomed Youth'. It gets its point across strongly without shocking the reader and frightening them into the truth. In 'Fall In' I think it's disgusting that people write poems about signing up for the war and how much it benefits you. I was concerned about did the author Harold Begbie know the actual conditions of the war? I found out that by the end of the war he had changed his view and was horrified by the slaughter on both sides. By Elior Sion ...read more.