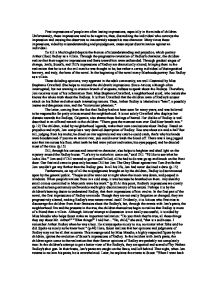 Prejudice in To Kill A Mockingbird

First impressions of people are often lasting impressions, especially in the minds of children. Unfortunately, these impressions tend to be negative, thus, discrediting the individual who conveys the impression and causing the observers to inaccurately assess his true character. Many times these impressions, aided by misunderstanding and prejudgment, cause unjust discrimination against an individual. To kill a Mockingbird depicts the themes of misunderstanding and prejudice, which portray Arthur (Boo) Radley as a villain. Through the progressive revelation of Radley's character, the children realize that their negative impressions and fears toward him were unfounded. Through gradual stages of change, Jem's, Scout's, and Dill's impressions of Radley are dramatically altered, bringing them to the realization that he is not the evil man he was thought to be, but rather a caring individual of distinguished bravery, and truly, the hero of the novel. In the beginning of the novel many falsehoods portray Boo Radley as a villain. These deluding opinions, very apparent in the adult community, are well illustrated by Miss Stephanie Crawford. She helps to mislead the children's impressions. Since Atticus, although often interrogated, but not wanting to create a breach of etiquette, refuses to speak about the Radleys. Therefore, Jem receives most of his information from Miss Stephanie Crawford, a neighborhood scold, who insists she knows the whole truth about the Radleys. ...read more.

Arthur?" "What things?" I told her... "No, child," she said, "that is a sad house. I remember Arthur Radley when he was a boy. He always spoke nicely to me, no matter what folks said he did. Spoke as nicely as he knew how." (p.46) Here, Scout realizes that her opinions and judgments of Radley may not be all that accurate. This message said by Miss Maudie, a highly respected figure by the children, ignites the evolution of Scout's impressions of Radley. In the incident with Jem's pants, the children again come to the realization that their former opinions of Radley are probably not completely true: In the children's attempt to get a better view of the Radley's, they are spotted and scared off by Nathan Radley's shot gun. In their haste, Jem's pants are caught on the fence, and left behind. That night, when Jem returns to reclaim his pants, he is overwhelmed. Later, he explains the events to Scout: "When I went back for my breeches they were all tangle when I was gettin' out of 'em, I couldn't get 'em loose. When I went back.." Jem took a deep breath. "When I went back, they were folded across the fence... like they were expectin' me." ...read more.

(p.278) This is a very special realization for Scout, she acknowledges Radley's good nature and kindness. She realizes that Radley had given them their lives, the most important gift of all. Radley has indeed found a place in the children's hearts, and through his natural goodness he comes out as the true hero of To Kill a Mockingbird. Scout probably learns an invaluable lesson through all of this: never prejudge others, because first impressions, although usually lasting impressions, are not always the true impressions. Through many fundamental stages in the novel, the character of Boo Radley is slowly unraveled depicting his true self. From looking at first impressions, evolving, growing and changing impressions, Radley's character is gradually exposed. This growth and process of change makes the children realize that prejudgment of people generally inaccurately and negatively represents an individual. There is an important lesson to be learned from this novel: never prejudge people based on limited knowledge and generalize on first impressions, because these often hinder more than help. Perhaps it is also important to remember that the first impressions of Boo Radley portrayed him as a villain, and yet truly he was quite the opposite of that. Maybe if we stop prejudging others we will see something entirely different in them. We should never ignorantly prejudge others, for these people end up being the true heroes of our world. ...read more.