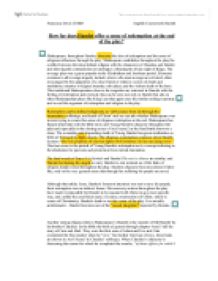 How far does Hamlet offer a sense of redemption at the end of the play? Shakespeare, throughout Hamlet, discusses the idea of redemption and the sense of religious influences through the play. Shakespeare establishes throughout the play the conflict between the ideas behind religion with the characters of Claudius and Hamlet and showing this contradiction in ideologies: debating the divine right of Kings. The revenge play was a genre popular in the Elizabethan and Jacobean period. Elements common to all revenge tragedy include: a hero who must avenge an evil deed, often encouraged by the apparition of a close friend or relative; scenes of death and mutilation; insanity or feigned insanity; sub-plays; and the violent death of the hero. ...read more.

The religious connotations continue when Hamlet declares "But I do prophesy th'election lights On Fortinbras; he has my dying voice" This last scene is the pinical of Young Hamlets redemption as it a concept referring to the absolution for past sins and protection from eternal damnation. The final words of Jesus It is finished and Hamlet The rest is silence are similar, and Horatio beckoning the angels to carry Hamlet to rest reminds us of the links of religion deeply rooted throughout the play. Hamlets character becomes almost Christ-like, only in the very general sense that through his suffering his people are saved. Although that unlike Jesus, Hamlet's foremost intention was not to save his people; their redemption was an indirect bonus. ...read more.

It describes the jealousy and envy he felt for his older brother, he begins to justify his actions as his want and greed to be King, he believes, is the price of murder and the 'DIVINE RIGHT OF KINGS' The story of Cain and Abel is also followed when God protects Cain from being slain after he killed his brother, which can have great relevance to Hamlet not killing Claudius following his soliloquy. "Now might I do it pat, now a is a-praying, and now I'll do't- and so a goes to heaven, and so I am revenged." Hamlet refrains from killing Claudius because he is praying, which in-tern brings back to the element of religious aspects in Shakespeare's Hamlet. ?? ?? ?? ?? Francesca Davis 12SBD English Coursework Hamlet ...read more.

This essay does address the idea of redemption being a religious concept in the second paragraph and some good points are made about this. The idea of redemption being a religious one would have been particularly relevant during Shakespeare's time of writing; however the question allowed for a broader interpretation which was not explored in this essay. Given the length of 'Hamlet' and the numerous opportunities for character analysis this essay should have been more developed in order to produce a suitably sustained response. The structure of the play could have been explored; considering the moments of the play when Hamlet acted without responsibility or consideration of consequence and those moments when the audience may have true empathy and forgiveness for the character.