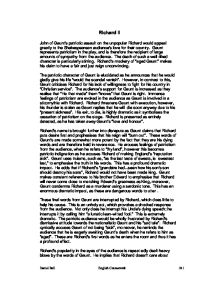 Richard II. John of Gaunts patriotic assault on the unpopular Richard would appeal greatly to the Shakespearean audiences love for their country

Richard II John of Gaunt's patriotic assault on the unpopular Richard would appeal greatly to the Shakespearean audience's love for their country. Gaunt represents patriotism in the play, and is therefore the recipient of large amounts of sympathy from the audience. The death of such a well-liked character is particularly stirring. Richard's mockery of "aged Gaunt" makes his claim to have a fair and just reign unconvincing. The patriotic character of Gaunt is elucidated as he announces that he would gladly give his life "would the scandal vanish". However, in contrast to this, Gaunt criticises Richard for his lack of willingness to fight for his country in "Christian service". The audience's support for Gaunt is increased as they realise that "He that made" them "knows" that Gaunt is right. ...read more.

He arouses feelings of patriotism from the audience, when he refers to "thy land", however this becomes patriotic indignation as he accuses Richard of making England's "reputation sick". Gaunt uses truisms, such as, "as the last taste of sweets, is sweetest last," to emphasise the truth in his words. This has a profound dramatic impact. He adds that if Richard's "grandsire had...seen how his son's son should destroy his sons", Richard would not have been made king. Gaunt makes constant references to his brother Edward to emphasise that Richard will never come close to matching Edward's greatness as King, moreover, Gaunt condemns Richard as a murderer using a sardonic tone. This has an enormous dramatic impact, as these are dangerous words to utter. ...read more.

Gaunt places lavish praises on England, which stimulates great patriotic emotions in the audience. These emotions are experienced not only by the people watching the play, but also by the large number of people on stage. This effect of having two audiences augments the dramatic impact. Gaunt constantly refers to England as a "demi-paradise" and a "precious stone", which help to emphasise both the patriotism of Gaunt, and the corrupt nature of Richard for allowing such a "blessed" country to fall into disrepair. He describes England as a microcosm. Throughout the scene, Shakespeare uses the audience's reverence for a dying man's words to create a powerful dramatic effect. The poignant contrast between the two main characters; Richard and Gaunt would appeal overwhelmingly to the patriotism of a contemporary Shakespearean audience. ?? ?? ?? ?? Daniel Bell English Coursework 10.1 ...read more.