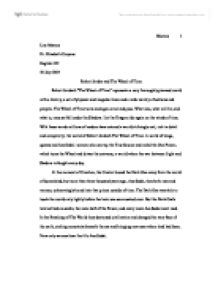 Robert Jordan and The Wheel of Time.

Masters 1 Lisa Masters Dr. Elizabeth Gwynne English 102 19 July 2004 Robert Jordan and The Wheel of Time Robert Jordan's "The Wheel of Time" represents a very thoroughly planned world with a history, a set of physical and magickal laws and a wide variety of cultures and peoples. The Wheel of Time turns and ages come and pass. What was, what will be, and what is, may yet fall under the Shadow. Let the Dragon ride again on the winds of time. With these words millions of readers have entered a world strikingly real, rich in detail and complexity; the world of Robert Jordan's The Wheel of Time. A world of kings, queens and Aes Sedai: women who can tap the True Source and wield the One Power, which turns the Wheel and drives the universe; a world where the war between Light and Shadow is fought every day. At the moment of Creation, the Creator bound the Dark One away from the world of humankind, but more than three thousand years ago, Aes Sedai, then both men and women, unknowingly bored into that prison outside of time. The Dark One was able to touch the world only lightly before the hole was soon sealed over. ...read more.

She is also finding herself falling in love with Lan, Moiraine's Warder. Included in this group is a young Ogier named Loial, who is supremely quiet, steadfast and humble in his ways. He is fearful of what his mother and the Elders of the Stump might do if they happen upon him while he is Outside and seems to hide from any Ogier they encounter. Though quiet, his temper does flare occasionally at anything that might harm those he cares about. He finds himself falling in love with a young female Ogier, yet remains steadfast to Rand and his friends as he sets to write a book on the life of the Dragon Reborn and his small group of friends. This small group are the people who are at the heart of the stories that fulfill prophecy. In my opinion, the characters Lan, Moiraine and Perrin weren't fully brought out. These three seem to be an afterthought almost. Moiraine is the one who brings everything about, yet there isn't much known about her beyond the fact that she was set to hunt the Dragon Reborn. Lan seems a very mysterious figure in the way that he never speaks and always seems to have a glow of anger around him. ...read more.

for one man to kill another, and never to use the One Power as a weapon except as a weapon against Shadowspawn or, in the last extreme, of defending her own life, or that of her Warder or another sister. The magickal workings of Jordan's Aes Sedai are much akin to today's Witchcraft. The circle of thirteen, the powers, the spells, the herbs, all of it can be found in today's witch's covens. In his books, people lived in fear of Aes Sedai and their powers, as today, people fear those who's spiritual choice is Wicca. Then, there were fears of displeasing an Aes Sedai even though they only ruled in Tar Valon, yet Kings and Queens were wary of Aes Sedai machinations. Now, there are fears that are unfounded yet many people believe that covens are of a satanical nature, and they will steal your child and sacrifice him or her to the Devil. In short, I find Robert Jordan's books amazing in the way of fantasy fiction. His characters are refreshingly honest and real people. His imagination leaves you on the edge of your seat wondering why something happened or what was about to happen. The Wheel of Time turns and Ages come and pass; only you know the path that you choose. ...read more.