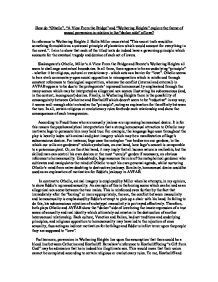 s****l perversion in Wuthering Heights, Othello, and a View from the Bridge.

How do "Othello", "A View From the Bridge" and "Wuthering Heights" explore the theme of s****l perversion in relation to the "darker side" of love? In reference to Wuthering Heights J. Hellis Miller once stated "This secret truth would be something formulable as a univocal principle of plantation which would account for everything in the novel.". I aim to show that each of the titled texts do indeed have a governing principle which accounts for the eventual tragedy and demise of each set of lovers. Shakespeare's Othello, Miller's A View From the Bridge and Bronte's Wuthering Heights all seem to challenge contextual boundaries. In all three, there appears to be an underlying "principle" - whether it be religious, cultural or evolutionary - which acts as a barrier for "love". Othello seems to be a stark commentary upon social opposition to miscegenation which is reinforced through constant references to theological superstition, whereas the conflict (internal and external) in AVFAB appears to be due to the protagonists' repressed homosexuality emphasised through the many scenes which may be interpreted as allegorical s*x scenes illustrating his subconscious (and, in the context, incongruent) desires. Finally, in Wuthering Heights there is the possibility of consanguinity between Catherine and Heathcliff which doesn't seem to be "reductive" in any way; it seems well-enough able to stand as the "principle", acting as explanation for the affinity between the two. ...read more.

Therefore, both plays Othello and AVFAB show the "darker" side of love being the innate repression of a true sense of sexuality and real identity which ultimately culminates in the destruction of another heterosexual relationship. Each culture, Venetian and Italian, had set traditions and underlying principles, and religious opposition to homosexuality may have led to the rejection of ones sexuality, thus acting as indirect motivation for both Iago and Eddie to inflict terror upon the people they are supposed to "love". Furthermore, perversion in Wuthering Heights lies upon the assumption that there could be a blood line between Catherine and Heathcliff. Earnshaw's reference to Heathcliff being "a Gift from God" may be admission that he is indeed his illegitimate son. This would mean that their union cannot be completed according to certain religious or evolutionary rules. To me, Heathcliff and Catherine's relationship goes beyond any possible rationality and therefore, there must be an underlying reason as to why they cannot consummate their love which is contrary to evolutionary and religious doctrines. This "theory" seems likely due to the very Byronic nature of Bronte literature; the innate passion between Catherine and Heathcliff incongruently combined with their intransigence in pursuing that quest suggest transcendent meanings, like in Othello. ...read more.

and the former is consumed by homoerotic s****l jealousy. Furthermore, the character of Iago uses the phrase "I am not what I am" which directly contrasts with Exodus 3:14, where God says to Moses "I am what I am". Therefore, Iago uses the line to foreshadow his deception of Othello, but simultaneously Shakespeare may have also used the allusion in order to show that Iago directly contrasts with God, portraying him as satanic, and, thus, these binary oppositions elucidate the central theme of "good" versus "evil". In the same way, I would argue that embedded within the narrative of Wuthering Heights is a complex system of biblical hermeneutics. Most poignant is the idea that love has become a religion; which would offer an explanation for the inexorable connection between love and death in the characters' speeches and actions. The way in which Wuthering Heights can be read as an anti-Christian novel, so too can Othello, for the reason that during Elizabeth's reign as Queen of England, her Protestant religious settlement more or less forbade Catholicism in the country. Shakespeare, therefore, being secretively Catholic may have included subverted relationships as an attack upon the religious tradition of his time and society. ...read more.